Protesters Copy Ways of Extremists Against US

Update Required To play the media you will need to either update your browser to a recent version or update your Flash plugin.
By Mario Ritter
11 January, 2016


Armed protesters continue to occupy a U.S. national wildlife refuge in the western state of Oregon.

Some experts say the protesters have been influenced by the extremist militia movement to fight against the federal government.

The protesters moved in while the Malheur National Wildlife Refuge was closed during the New Years' holiday. 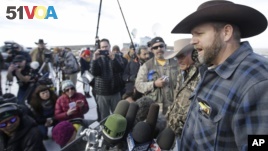 Ammon Bundy, a leader of the occupying protesters at the Malheur National Wildlife Refuge, speaks to reporters during a news conference at the refuge near Burns, Ore., Jan. 6, 2016. (AP Photo/Rick Bowmer)

The leader of the protest is Ammon Bundy. He is a rancher from Nevada. Bundy said the occupying group has named itself Citizens for Constitutional Freedom. Bundy said he wants the government to consider claims that federal officials have mistreated local ranchers.

They are also bringing attention to the case of Dwight and Steven Hammond. They are two Oregon ranchers who were found guilty of setting fires illegally on public land. The ranchers were ordered to return to prison after a judge found they had not served enough of their five-year sentence. They have since returned to prison.

Bundy has been involved in standoffs with government officials before. In 2014, Bundy, his father Cliven and his brother took part in another armed standoff with federal officials. They had refused to pay money for grazing their cattle on federal land. The standoff ended when the U.S. government returned cattle to the family that it had seized.

John Freemuth is an expert in land use at Boise State University in the Idaho. He says the protesters are dealing with issues of concern to Western ranchers. The government controls huge areas of land in the Western United States. That includes more than half of the state of Oregon. 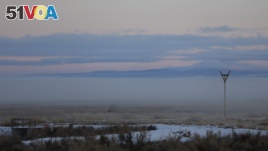 Freemuth says there has been a change in public values about wildlife protection and public lands. He says this has left ranchers feeling "squeezed by all these changes, new environmental laws...and they feel they're not listened to."

The loosely organized occupation group has brought together people with many concerns, including gun rights. Oregon is one of 45 states with so-called "open carry" laws, which permit people to carry firearms.

One protester Jon Ritzheimer has led armed anti-Islamic protests in his home state of Arizona. Ritzheimer posted an emotional declaration on YouTube warning that "there's no stopping us."

John Freemuth says most Oregonians are appalled at the confrontation. He says they consider the occupiers outside activists "who have rolled in, armed and threatening, and have gone way beyond what the local folks are protesting."

Ryan Lenz is with the Southern Poverty Law Center. The organization studies extremist groups. Lenz says some ranchers who have real grievances with the federal government have been influenced by what he calls fringe ideologies. He says anti-government extremists should not control what is lawful "in a country where we have a longstanding system of jurisprudence as organized by our courts."

Rick Eaton is a researcher on extremist groups at the Simon Wiesenthal Center in Los Angeles. He believes federal officials have shown restraint. Eaton says, "To their credit, the government has backed off and has not created a standoff."

Many standoffs end without violence or injury such as the occupation in 1972 of the Bureau of Indian Affairs in Washington DC. Others like one in Ruby Ridge, Idaho in 1992 and another near Waco, Texas, ended with the deaths of civilians and federal agents.

Sheriff David Ward of Harney County in Oregon addressed the armed protesters on Monday. He said, "It is time for you to leave our community. Go home to your own families and end this peacefully."

Mike O'Sullivan reported this story from Los Angeles. Mario Ritter adapted it for VOA Learning English. Hai Do was the editor.

What do you think about the protesters in Oregon? Let us know in the Comment section and on 51VOA.COM.

standoff –n. an argument or contest in which there is no winner

rancher –n. a person who works on a ranch, often raising cattle

grievances –n. feelings of having been treated unfairly

fringe –adj. the outer edge of something, not mainstream

ideologies –n. the set of ideas or beliefs of a group or political party

jurisprudence –n. the study of law