Iran Glad for Sanction Relief, But Wary of US

Update Required To play the media you will need to either update your browser to a recent version or update your Flash plugin.
By Jim Dresbach
19 January, 2016


Iran says it welcomes the easing of economic sanctions, but will remain wary of the United States.

The U.S. imposed the new sanctions Sunday against five Iranian nationals and a network of companies with links to banned missile activity. The U.S. Treasury Department said five Iranians worked to get missile parts for Iran. Companies in the United Arab Emirates and China also were involved. 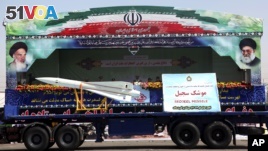 Sedjeel, an Iranian made ballistic missile, is showcased during an annual military parade in Tehran, Iran, Sept, 22, 2013.

Iran drew anger from the United States and other Western powers last year when Iran tested two ballistic missiles. Iran defended the tests as a matter of national security.

The new sanctions come after economic sanctions were lifted which were tied to Iran's nuclear program.

Following the lifting of the sanctions, Iran announced an increase in oil production by 500,000 barrels a day. Iran currently produced 3 million barrels per day. About 1 million of the barrels are exported.

This report was based on information from VOAnews. Jim Dresbach adapted the story for Learning English. Kathleen Struck was the editor.

network - n. a group of people or organizations that work with each other; a system of computers and other devices that are connected to each other

matter - n. something that is being done or talked about

wary - adj. not having or showing complete trust in someone or something

sanction – n. an action that is taken or an order that is given to force a country to obey international laws by limiting or stopping trade with that country