Update Required To play the media you will need to either update your browser to a recent version or update your Flash plugin.
By Christopher Jones-Cruise
15 January, 2016

Demonstrators attacked and burned parts of the Saudi embassy in Tehran and in other countries after Sheikh Nimr al-Nimr was executed with 46 others. 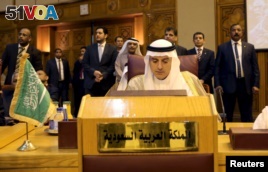 Eight Arab countries have weakened or ended diplomatic relations with Iran because of the attacks.

The foreign ministers and diplomats gathered Sunday in Cairo.

Saudi Foreign Minister Adel Jubeir said Iran helps people in Arab countries work against their governments. He said Iran should "stop interfering in (the) internal affairs" of its neighbors.

Last week, Iranian President Hassan Rouhani called the attack on the Saudi Embassy "wrong and against the law." He also said the execution of al-Nimr was a crime. Al-Nimr had publicly criticized the Saudi royal family.

Nabil El Arabi leads the Arab League. He said Iran can reduce tensions with its neighbors. He said Iran must take steps to show it wants to improve relations and not interfere in the governing of other countries.

Hilal Kashan is a professor of political science at the American University of Beirut. He told VOA the Arab League meeting will probably not produce any results.

He said, "the Saudis simply wanted a statement of solidarity (from the Arab League) and they got it. They did not really ask for more or expect more." He notes that Iran suspended some police officials in Tehran after the Saudi embassy was attacked.

Edward Yeranian in Cairo reported on this story for VOANews. Christopher Jones-Cruise adapted his story for Learning English. He also used information from Time. Kathleen Struck was the editor.

Write to us in the Comments section, or visit our 51VOA.COM, about this issue.

applaud – v. to strike the hands together over and over to show approval or praise

internal affairs – n. events that take place inside a country