Update Required To play the media you will need to either update your browser to a recent version or update your Flash plugin.
By Bruce Alpert
20 January, 2016


Police are investigating threats against dozens of schools this week in seven U.S. states.

Searches failed to find bombs or other dangers.

Threats were called in to at least 26 schools in New Jersey on Tuesday. Most were to schools in suburbs of New York City, police said. 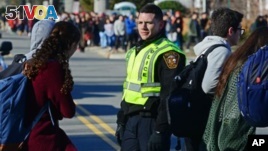 Tenafly High School students return to their building after being evacuated to the middle school in Tenafly, N.J., Tuesday, Jan. 19, 2016. Authorities say bomb threats were made against schools in New Jersey, but none of the threats are considered valid. (Tariq Zehawi/The Record of Bergen County via AP)

Other threats were called in Tuesday to schools in Maryland, Iowa, Massachusetts, Delaware, Arizona and Florida. Wednesday brought more bomb threats to schools in Delaware and Arizona.

The threats come at a time polling shows Americans worried about terrorist attacks.

At Clifton High School, a voice mail warned of a bomb. A separate call warned of a "mass shooting" at the school later on Tuesday, said Sgt. Robert Bracken of Clifton Police Department.

The responses to the threats varied, according to news reports. Some schools moved students to other buildings while officials searched the threatened schools. In New Jersey, some students said they waited outside their schools for an hour or more without coats in below freezing temperatures.

Other schools closed for the day. And some kept students "locked down" in their classrooms.

Police and school officials said Tuesday they could not say if most threats came from a single group or person. They also said they did not know the reason threats were made.

Some police said some calls appear the work of "copy cats." Copy cats are people who repeat an action taken by somebody else.

No bombs were found. Los Angeles and New York are the largest school districts in the United States.

The threats are making some students and parents nervous.

NBC 4 TV News in New York reported some students said they decided not to return to school Tuesday after the "all clear" signal was given because they remained afraid.

Last month, President Barack Obama observed the third anniversary of the mass shooting at Sandy Hook Elementary School in Connecticut. A lone gunman killed his mother and then drove to the school where he killed 20 first graders and six educators.

"We have to take the threat seriously, but we also have to balance our approach so that we're not scaring the kids," said Police Lieutenant David Burghart, according to Insidenova.com

But a school official told parents they should tell their children to report any threats they hear about from classmates or others.

Bruce Alpert reported on this story for VOA Learning English. His report was based on police and media reports. Kathleen Struck was the editor.

alter – v. to change something or someone

locked down -- v. to be kept in place

polling - n. an activity in which many people are asked questions in an effort to get information about what most people think about something

coats - n. an outer piece of clothing that keeps a person warm or dry