Update Required To play the media you will need to either update your browser to a recent version or update your Flash plugin.
By Christopher Jones-Cruise
20 January, 2016

Officials say many more were wounded.

Police say the four attackers entered the university in Charsadda at around nine in the morning and began shooting students and teachers. Students and university workers told a VOA correspondent at the university that some of those killed or wounded were both shot and stabbed. 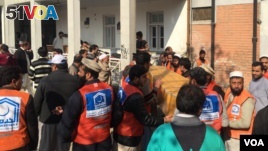 A spokesman for the Pakistani Taliban denied responsibility for the attack. Mohammad Khorasani said the group does not target non-military organizations.

But earlier, a Taliban commander in the area said he sent the four attackers to the university.

A Pakistani military spokesman said troops killed the four attackers and took control of the university.

About 3,000 students attend the university.

Charsadda is about 50 kilometers from the provincial capital, Peshawar. In December 2014, militants linked to the Pakistani Taliban attacked a school in Peshawar and killed 150 people, most of them children.

Reporters Ayesha Tanzeem and Ayaz Gul prepared stories on the attack for VOANews. Christopher Jones-Cruise adapted their stories for Learning English. Kathleen Struck was the editor.

spokesman - n. a person who speaks for someone else or for a group

provincial - adj. of or concerning a province (an area outside the capital or a city)