Social Business Starters on the Rise

Update Required To play the media you will need to either update your browser to a recent version or update your Flash plugin.
By Mary Gotschall
27 February, 2016


Social entrepreneurs – people who create start-up companies that would help the environment, health care or agriculture – are on the rise.

These entrepreneurs use innovation to tackle important economic and social problems. They can be for-profit or non-profit entities.

Funding for social entrepreneurs is increasing. This is coming from foundations, institutional investors and individuals. 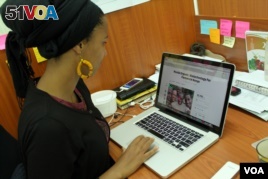 Entrepreneur Marion Moon has turned to online crowdfunding to get her organic fertilizer company off the ground. Feb. 10, 2015. (Hilary Heuler / VOA News)

Kiplinger is a personal finance publication in Washington, D.C. It reported that the amount of assets in socially responsible investing – focused on companies doing good in the world – almost doubled, from $3.74 trillion in 2012 to $6.57 trillion in 2014.

Globally, interest in socially responsible investing is growing even faster. The 2014 Global Sustainable Investment Review said that between 2012 and 2014, global assets rose to $21.4 trillion from $13.3 trillion – an increase of 61 percent.

The Schwab Foundation for Social Entrepreneurship, in Geneva, Switzerland, is an example of a foundation that advances social entrepreneurs around the world. Each year, working with the World Economic Forum, the foundation searches the globe "for outstanding social innovators, with business models that are proven to drive social and environmental change," said their website.

Getting rich is not the primary aim of social entrepreneurs. Instead, their focus is on fulfilling their mission to improve society.

"While profits are ideally generated, the main aim is not to maximize financial returns for shareholders, but to grow the social venture and reach more people in need," said the Schwab Foundation website. Usually, social entrepreneurs reinvest their profits in the enterprise to expand it.

Kristin Groos Richmond is co-founder of Revolution Foods and one of the social entrepreneurs selected by the Schwab Foundation. Her company, in Oakland, California, is dedicated to providing fresh food, prepared daily, for families and schools, and is active in 11 states across the U.S. and Washington, DC.

He founded the non-profit organization APOPO in 1997. APOPO has used specially trained rats on leashes to clear more than 13,200 unexploded bombs from minefields in Tanzania, Mozambique, Angola and Cambodia, according to the National Geographic.

APOPO uses African giant-pouched rats, which are huge, cat-sized rats native to central Africa. They have "an extraordinary sense of smell," said the National Geographic. The rats are lightweight enough to walk across the mines without setting them off. And their sensitive noses can sniff out explosives buried in the ground, even decades after a war has ended.

In addition, many business schools – both in the U.S. and other countries – now offer courses in social entrepreneurship. The Wharton School at the University of Pennsylvania is an example. It is ranked by US News & World Report as one of the nation's top business schools.

Wharton Online offers a five-week class on social entrepreneurship, four to six hours a week, through Coursera, a global e-learning platform. Graduates of the course receive a certificate and "learn how to develop, test and deploy high-impact solutions to society's toughest problems," according to Coursera's website.

One honoree, Sejal Hathi, age 25, was a molecular biology student at Yale, who sought to help girls globally. She founded Girltank (www.girltank.org), a for-profit start-up, to identify and develop girls with potential to be high-impact leaders. The website refers to it as "the she lab for social entrepreneurship."

"Girltank creates a virtual tank for young women interested in social entrepreneurship to utilize the collective genius of the group to brainstorm ideas and solutions, crowd-sourcing funding for their ventures, and receive peer-to-peer mentoring," according to the website.

innovation – n. the act of introducing or using new ideas or methods

asset – n. something that is owned by a person, company, etc. — usually plural

fulfill – v. to succeed in achieving (something) : to make (something, such as a dream) true or real

aspire – v. to want to have or achieve something (such as a particular career or level of success)

novel – adj. new and different from what has been known before

leash – n. a long, thin piece of rope, chain, etc., that is used for holding a dog or other animal

crowd-source – v. the practice of obtaining needed services, ideas, or content by soliciting contributions from a large group of people and especially from the online community

mentor – v. to teach or give advice or guidance to (someone, such as a less experienced person or a child)