Update Required To play the media you will need to either update your browser to a recent version or update your Flash plugin.
By Dan Friedell
07 August, 2017

Last week, the American space agency NASA announced it was looking for a "Planetary Protection Officer."

Many people discussed the job on social media. The Washington Post called the job's title "one of the greatest ever conceived."

Most people thought the job seemed like something out of a movie. Action stars like Bruce Willis in "Armageddon" or Will Smith in "Men in Black" or "Independence Day" seem like they would be good candidates for the job.

After NASA published the job description, a nine-year-old boy from the state of New Jersey wrote a letter to NASA. He told the space agency that he believes he is the right person for the job. 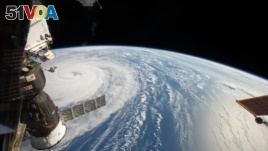 The boy, Jack Davis, used a pencil and a white sheet of paper to write the letter. In it, he wrote: "I may be nine, but I think I would be a good fit ... my sister says I am an alien. Also, I have seen all the space and alien movies I can see."

Because he is still so young, Jack wrote, he can easily learn to "think like an alien."

Jack signed the letter with his official title: "Guardian of the Galaxy."

The job, however, is more about science and biology and less about fighting aliens. The "Planetary Protection Officer" must make sure that NASA does not bring invasive species or plants to other planets, and does not return from trips to space with anything that might harm Earth.

Someone has been doing this job for NASA since the 1960s.

James Green is the director of NASA's Planetary Science Division. He responded to young Jack.

He explained that the person with the job protects Earth from "tiny microbes when we bring samples back from the moon, asteroids and Mars."

Green also wrote that NASA is always looking for scientists and engineers. He advised the boy to "study hard and do well in school," and wrote "we hope to see you here at NASA one of these days!"

Jonathan Rall is NASA's Planetary Research Director. He called Jack to congratulate him on his interest in the job.

A physicist named Sophia Nasr commented on Jack's letter. She wrote on Twitter: "I adore NASA's response to the young boy..." and included a heart emoji.

What do you think of the boy's letter to NASA? We want to know. Write to us in the Comments Section or on 51VOA.COM.

conceive – v. to think of or create (something) in the mind

microbe – n. a small living thing that can only be seen using a microscope

adore – v. to love or admire something very much