Update Required To play the media you will need to either update your browser to a recent version or update your Flash plugin.
By Phil Dierking
23 July, 2017


The chief executive officers of America's largest companies were paid an average of $15.6 million in 2016 says a recent study by an economic research group.

The Economic Policy Institute published the report written by Lawrence Mischel and Jessica Schieder. They say the average business leader's pay was 271 times what an average worker earns at the companies they studied.

This chief executive-to-worker pay ratio is smaller than it has been in the past few years. In 2014, the ratio was 299-to-1, according to the report. However, it is still much higher than the 20-to-1 ratio between chief executives and workers in 1965. In 1989, that difference was 59-to-1. 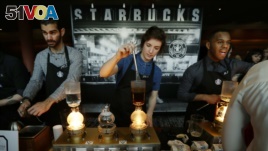 To get their results, the researchers added up employees' pay, special rights to buy stock at lower than market prices, and bonuses. The Economic Policy Institute is a research organization that studies the concerns of low- and middle-income workers.

According to the website Salary.com, CEOs are paid very high salaries because their skills and responsibilities are "extreme." They say there is only a limited number of people who can perform these job duties.

The report also noted the earnings of low-paid workers. The lowest paid full-time U.S. workers earn a minimum wage of about $15,000 a year.

The minimum wage is the lowest amount of hourly pay a company can legally pay its employee.

Most workers in the U.S. earn more than the minimum wage, and many states have a higher minimum wage than the federal limit. However, workers who earn the least amount of money in the study earn about one 1,000th the pay of the highest earning CEOs.

The U.S. federal minimum wage is $7.25 per hour. It has not been increased in eight years. According to the group Business for a Fair Minimum Wage, the buying power of that amount has decreased by about 15% because of inflation.

The group Business for a Fair Minimum Wage disagrees. It said that raising the minimum wage for the lowest-paid workers could help the economy by increasing the amount of money people have to spend.

Jim Randle reported this story for VOANews. Phil Dierking adapted his report for Learning English. Mario Ritter was the editor.

What do think the ratio of boss-to-worker pay is in your country? We want to hear from you. Write to us in the Comments Section or on 51VOA.COM.

bonus - n. an extra amount of money that is given to an employee

ratio - n. the relationship that exists between the size, number, or amount of two things and that is often represented by two numbers