Update Required To play the media you will need to either update your browser to a recent version or update your Flash plugin.
By Ashley Thompson
09 March 2022


Dust rises as men bring their horses onto a large field. Another game of buzkashi is about to begin.

Buzkashi is Afghanistan's national sport. Its name in English loosely means "goat pulling." The sport has been played across Central Asia for hundreds of years. It involves two teams on horseback trying to pull a headless, dead goat to one area in a field. A team earns points each time it gets the goat in that area. These days, the "goats" used for the game are usually not real.

Through foreign invasions, civil wars and the recent return of Taliban rule, Afghans have continued to gather to cheer on their favorite buzkashi riders. 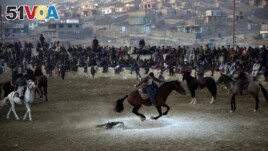 Afghan horse riders compete for the goat during a friendly buzkashi match on the outskirts of Kabul, Afghanistan.

National league games restarted on February 24 for the first time since the Taliban took over in August 2021. The Kandahar and Badakhshan teams played in front of about 5,000 Afghans, including members of the Taliban.

In the past, some games often brought fears of attacks. Players faced threats from people in their own province if they played for another provincial team.

But the Taliban's severe crackdown on crime has eased the minds of many, including Gulbuddin Ismail Khail. He is captain of the Kandahar team, last year's league winner.

"We had a good year last year, but this year is even better, because people are cheering for all teams with a calm mind," said the 37-year-old Khail. He is from Balkh province, but has chosen to play for the Kandahar team.

For fans, the sport's importance will survive the country's current crisis, just as it has outlasted wars of the past.

Abdul Saboor attended the recent game. He said, "Although there is a lot of poverty and unemployment in our country, we still came from Balkh province to watch this game, because we are very interested in the sport."

league - n. a group of sports teams that play against each other

province - n. any one of the large parts that some countries are divided into

crackdown - n. an increased effort to enforce a law or rule