Update Required To play the media you will need to either update your browser to a recent version or update your Flash plugin.
By Anna Matteo
23 February 2022


The ancient Italian city of Pompeii historically has had its fair share of ups and downs.

Back in 79 A.D., a volcano erupted and turned the lively city into a wasteland in just a few hours. The destructive event buried the city and its people in volcanic ash.

Then in this century, the excavated Roman city seemed close to a second death. This time not by a volcano, but by years of inattention and mismanagement of the heavily visited ruins. 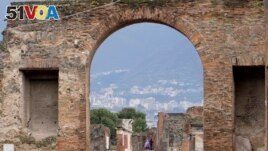 In 2010, a building where ancient Roman soldiers had trained collapsed. Because of this, Pompeii nearly lost its place as a UNESCO World Heritage Site, an honor it received in 1997.

But these days, Pompeii is beginning to experience a rebirth.

A restoration project to prevent more collapses includes new excavations. The work has led to new discoveries about the everyday lives of the ancient people of Pompeii.

The restoration is also helping to limit the effects of a new threat: climate change. Climate extremes — including increasingly intense rainfall and periods of extreme heat — could threaten Pompeii.

The new director of the ruins, archaeologist Gabriel Zuchtriegel, is using the latest computer technology to help restore Pompeii. He compares the ancient city's fast destruction, which began in the 1970s, to "an airplane going down to the ground and really risking breaking" apart.

"Some conditions are changing and we can already measure this," Zuchtriegel told The Associated Press.

The Great Pompeii Project was a $120 million restoration effort that ended in 2016. It helped keep the ruins from further harm. Zuchtriegel said, "It was all spent and spent well."

However, future problems are expected to develop for the ruins, which were first excavated 250 years ago. The ruins at Pompeii were first discovered in the 16th century, Encyclopedia Britannica says on its website.

Zuchtriegel said that moving forward, the use of new technology will be critical to help fight the ancient city's "battle against time."

AI to the rescue

The treasures of Pompeii include numerous pieces of art found on the floors and walls. Depending on humans alone to search for signs of climate-caused damage would be nearly impossible. So artificial intelligence (AI) tools and drones will help collect and process data and images in real time.

Since last year, AI and robots are doing what otherwise would be impossible jobs — such as putting wall paintings that have collapsed into very small pieces back together. Among the goals is to rebuild the painted ceiling of the House of the Painters at Work. It was destroyed by Allied bombing during World War II.

Robots will also help repair damage to collapsed structures in a building believed to have been used by Roman soldiers.

Seventeen of Pompeii's 66 hectares remain unexcavated. They are still buried deep under lava stone. There is a long-running debate over whether they should stay buried.

At the start of the 19th century, Zuchtriegel said, the idea was to "excavate all of Pompeii." But in the years leading up to the Great Pompeii Project, people were not quick to excavate. Zuchtriegel said the thinking was "because we have so many problems we won't excavate anymore."

The head archaeologist before him, Massimo Osanna, took a different approach to the restoration. Osanna targeted excavation in places that needed to be fixed and strengthened. This aimed to prevent further collapses.

"But it was a different kind of excavation. It was part of a larger approach where we have the combination of protection, research, and accessibility," Zuchtriegel said.

Helping the community too

Today, the goals of the Pompeii park go further than protecting ruins. The nearby towns have suffered from organized crime and high youth unemployment. This has caused many young people to leave.

So the archaeological park is bringing together students from the area's wealthy institutions and students from working class neighborhoods. They will perform together at Pompeii's Great Theater.

"We ... can try to contribute to a change," Zuchtriegel said.

There are also plans to create public walking grounds in an unexcavated part of Pompeii. That part of the ruins, until recently, had been used as an illegal waste dump and even a marijuana farm.

Frances D'emilio reported this story from Pompeii for the Associated Press. Anna Matteo adapted it for VOA Learning English.

erupt – v. to send out lava, rocks, and ash in a sudden explosion

excavate – v. to dig out and remove

artificial intelligence – n. a branch of computer science dealing with the simulation of intelligent behavior in computers

drone – n. an uncrewed aircraft or ship guided by remote control or onboard computers

lava – n. melted rock coming from a volcano or after it has cooled and hardened

accessibility – adj. able to be used or obtained

contribute – v. to give along with others