Update Required To play the media you will need to either update your browser to a recent version or update your Flash plugin.
By John Russell
30 September, 2017


This November, Lowell, Massachusetts will hold city council elections. Lowell is home to the second-largest Cambodian population in the United States. Four Cambodian-Americans are competing for positions on the city council.

Since 1999, only four candidates from Asian or Hispanic communities have been elected to the City Council. And voters have never chosen a minority candidate for the Lowell School Committee.

Last May, a group of residents of Lowell brought legal action against the city. The group accused the city of discrimination against minorities in its electoral system. Elections for all council seats are city wide. The group says the system favors white candidates. 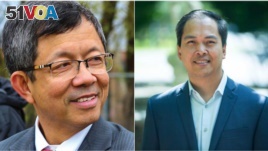 Vesna Noun, (left) and Sokhary Chau, are two of four Cambodian-American candidates from minority group in Lowell who run to get elected into Lowell's city council. (Courtesy Photo)

A major issue currently before the city council is whether to move Lowell High School or remodel it in place. Residents have strong feelings for and against moving the school.

Sokhary Chau is one of four Cambodian-American candidates. He called the election "crucial."

"The good thing is a lot of people are going to get involved in this election. The bad is the city is dividing," he said.

Vesna Noun is another of the Cambodian-American candidates. He won a council seat in 2010 but lost two reelection efforts.

Noun agrees that the high school is an issue of serious debate. But, he said there is also still serious public division over the issue of minority representation and the legal action brought in May. He said the council needs to settle that privately.

"It will affect the reputation of the city, if this matter is handled at the federal court," he said.

"It is better to change from the inside," he said.

Chau, and others, are calling for a change in the government leadership.

There is "a lot of dissatisfaction and disconnection to the local government," Chau said. "I hope to bring diversity and new ideas, pretty much new faces to the city."

Mathew LeLacheur, a white candidate for City Council, said he wants to see minority involvement at all levels of government.

LeLacheur said he would like to see more Cambodian-Americans on the local boards and commissions.

Sosreinith Ten reported on this story for VOA News. John Russell adapted it for Learning English. Caty Weaver was the editor.

reputation – n. the way in which people think of someone or something

commission – n. a group of people who have been given the official job of finding information about something or controlling something