Update Required To play the media you will need to either update your browser to a recent version or update your Flash plugin.
By Bryan Lynn
12 May 2022


Cambodian fishermen were surprised to discover a rare giant stingray they caught by accident in the Mekong River.

The fishermen caught the endangered fish last week in a deep part of the Mekong in Cambodia's northeastern Stung Treng province. It measured four meters long and weighed about 180 kilograms.

The giant freshwater stingray is one of Southeast Asia's largest and rarest species of fish. 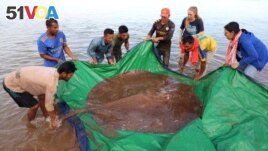 Local fishermen stand with a rescued giant freshwater stingray hooked by a fisherman's net at the Mekong River, in Stung Treng province, Cambodia May 5, 2022. (University of Nevada/Handout via REUTERS)

The stingray was caught when it swallowed a smaller fish that had taken a fisherman's hook. An international team of experts worked with the fishermen to unhook the fish. The team then examined the stingray before returning it unharmed to the river.

The experts were from Wonders of the Mekong, a U.S. government-financed organization. The group carries out research activities on the Mekong and shares its results with governments and communities along the river.

The Mekong River is Southeast Asia's longest, passing through China, Laos, Thailand, Myanmar, Cambodia and Vietnam. About 60 million people depend on the river for food and survival.

The Mekong is an important environment for numerous species, both large and small. But the leader of Wonders of the Mekong, Zeb Hogan, says the river's underwater ecosystem is poorly understood.

"These are unseen worlds, underappreciated and out of sight," Hogan said in a statement from his employer, the University of Nevada.

Speaking to Reuters, Hogan said the catch was "significant" because it "confirms the existence of these big fish in this stretch of river." However, Hogan added that the faraway area is not well studied and is considered "under threat."

The area could suffer "devastating ecological effects" if proposed hydropower dam projects move forward, the scientific team said in a statement. Other threats include illegal fishing and large collections of plastic waste.

Hogan has been studying biodiversity in the Mekong for more than 20 years. He told Reuters the reduction in population of some freshwater fish in the river was very concerning.

"Historically, this (part) of river produced 200 billion young fish," Hogan said. Then, during the flooding season, the fish were spread "throughout all of Cambodia and even into Vietnam," he added.

underappreciate – v. to not fully appreciate something; appreciate: to understand how good something or someone is

biodiversity – n. the number and kinds of plants and animals that exist in a particular area or in the world generally