Update Required To play the media you will need to either update your browser to a recent version or update your Flash plugin.
By Dan Friedell
08 May 2022


Shelly Tien is a women's health doctor based in Florida.

She used to take care of women who had high-risk pregnancies. But now, because it is hard to get safe abortions in some U.S. states, she travels from her home to states including Oklahoma and Alabama to help women end their pregnancies. An abortion is a medical procedure that ends the life of a fetus developing in a woman's uterus.

Tien permitted a reporter and a photographer from the Reuters News Agency to go with her while she did her work late last year and in March 2022. 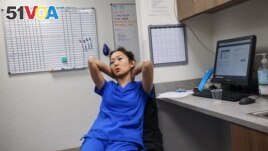 Dr. Shelly Tien travels throughout the U.S. as an abortion doctor. The work can be tiring and stressful. (REUTERS/Evelyn Hockstein)

Tien said she decided to start performing abortions when it looked like many states would make new laws restricting them. She is one of an estimated 50 doctors in the U.S. who travel from state to state to help with abortions.

She moved away from her old job in Illinois to take a job in Jacksonville, Florida with Planned Parenthood, a health organization that is known for helping women get abortions.

Inside the Planned Parenthood medical office in Birmingham, Alabama, Tien talked with a woman getting an abortion.

"You're doing great," she said. "So strong. Breathe. Excellent job."

Recently, the news website Politico published an early version of a document from the U.S. Supreme Court. The opinion proposed that the legal case Roe v. Wade, the decision that legalized abortion throughout the U.S., should be overturned.

States run by those who are against abortion are working to put laws in place that would place restrictions on the procedure. Other, more permissive states, are working to expand abortion availability.

Over 20 states have in place or are putting in place measures that place restrictions on abortions. They include Oklahoma and Alabama where Tien works. Tien said she does not want to think about what her work will be like if the court overturns Roe v. Wade.

She thinks some women will try to get unsafe abortions. She called that idea "deeply sad."

She said she will continue performing abortions legally.

"I'll follow whatever state restrictions ... are in place," she said, but noted that she cannot be sure what the restrictions will be like state-to-state.

One of the reasons Tien must travel from her home to other states is that at least six states in the U.S. do not have local doctors who will perform abortions.

Zack Gingrich-Gaylord is a spokesperson for a group called Trust Women. It helps women get abortions in places where they are hard to get.

He said it can be hard for doctors to get approval to perform medical procedures in several states. Doctors are required to have state licenses. And some states do not permit doctors to do abortions if they do not have permission from a hospital to admit patients.

The non-profit group, Susan B. Anthony List, opposes abortion. It says it is important for doctors who perform abortions to be able to send patients to the hospital if there is a problem. Suzanne Swayze Liebel, an official with the group, said doctors need to be able to take care of their patient for longer than one hour after a procedure.

Abortion rights groups say problems are not common and clinics have ways to deal with emergencies even if the doctor who did the abortion is not present. They say permission to send a patient to a hospital is an unnecessary requirement that makes it harder for doctors like Tien to work.

Patients from far away

When she is in Birmingham, Tien sees patients from states such as Georgia, Texas, Mississippi, and Louisiana. Those states place restrictions on abortion.

When Tien came to Birmingham, Alabama, in March, she carried out six abortions by surgery and 12 by giving medication to the patient. Their ages were from 19 to 36. One did not speak English and another drove many hours from Louisiana.

One woman who only gave the letters of her name, A.W., said she decided to have an abortion because she did not think the father had enough money to support a baby. She did not tell him about it. She said she did not want to have the baby, but the man would probably try to change her mind.

Tien gave her a pill that started the abortion process. She gave A.W. other pills that would finish the process. She said there might be some pain from muscle contractions called cramps.

The doctor said she believed from a young age that women should have control of their bodies. She also said she knows that some people do not like her work, and they could try to hurt her.

She has a home protection system and always makes sure she has enough fuel in her car in case she has to run away from danger.

When she went to Oklahoma City, a security guard watched the door and checked the belongings of everyone who came inside. Tien entered the building from a separate area, away from protesters who gathered at the main entrance.

When Tien was there in March, one person held a sign that said: "Life, the first inalienable right."

Tien wants to do her work, and she knows she has to take early morning airplane flights and drive long distances. Sometimes she plans to work in one city and then travel over 1,000 kilometers so she can work somewhere else the next day.

But flight delays can add stress to an already stressful job.

Recently, she had to run through the Atlanta airport to make it to a Jacksonville, Florida, flight. But she was glad she did not have to drive.

"One thing I don't have stamina for is driving," she said.

Dan Friedell adapted this report for Learning English based on a story by Reuters.

pill –n. a small, rounded object that you swallow and that contains medicine, vitamins,

muscle – n. a body tissue that can contract and produce movement

inalienable – adj. impossible to take away or give up

stress –n. a state of mental tension and worry caused by problems in your life or work

stamina – n. great physical or mental strength that allows you to continue doing something for a long time