Update Required To play the media you will need to either update your browser to a recent version or update your Flash plugin.
By Robert Carmichael
19 November, 2015


A warrant for the arrest of Cambodian opposition leader Sam Rainsy has stranded him in South Korea.

Sam Rainsy left on a trip to Japan and South Korea in early November. He was scheduled to return home after two weeks on November 16.

A parliamentary committee controlled by the country's ruling party stripped him of his legal immunity and his seat on Friday. 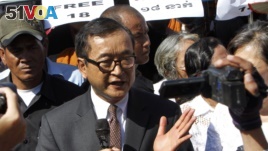 The ruling Cambodian People's Party voted to fire Sam Rainsy's deputy from his post in October.

Before that, two delegates from the opposition Cambodia National Rescue Party were severely beaten by a mob. The delegates were leaving parliament. Police did not intervene.

Later that day, the deputy's home was attacked.

Many people believe CPP ordered the attacks, but the party denies the accusations.

Political analysts say these scare tactics influenced elections in the past and might have the same effect leading up to the next election in 2018.

The CNRP came within 300,000 votes of winning the most recent election in 2013. The CNRP is seen as a threat to the CPP and Hun Sen, who has ruled the country for 30 years.

Will Cambodian opposition leader Sam Rainsy get back to Cambodia? Write to us in the Comments section or on 51VOA.COM.

confrontation – n. a situation in which people, groups, etc., fight, oppose, or challenge each other in an angry way

immunity – n. special protection from what is required for most people by law

intervene – v. to become involved in something (such as a conflict) in order to have an influence on what happens

stranded – v. to leave (a person or animal) in a place without a way of leaving it — usually used as (be) stranded