Update Required To play the media you will need to either update your browser to a recent version or update your Flash plugin.
By VOA
19 November, 2015


North Korea has declared a "no-sail zone" off its eastern coast and raised concerns that it will carry out a missile test.

Officials said this week that the no-sail zone is near the eastern coastal city of Wonsan. It is effective from November 11 to December 7. Reports say the order started in North Korea's internal communications channels.

The U.N.'s International Maritime Organization told VOA it has not received any notification from North Korea about a no-sail declaration.

The move comes as South Korean media reported that the U.N. Secretary General planned to visit the North. 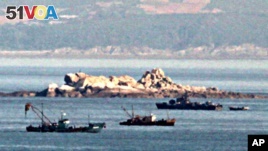 North Korea has declared a "no sail zone" near its eastern coast. The move has led South Korean media to speculate whether the country will carry out a missile test.

However, a U.N. spokesperson said Wednesday that Secretary-General Ban Ki-moon would not travel to the communist country.

A spokesperson for South Korea's Joint Chiefs of Staff, told reporters Monday the military will increase readiness if necessary. The spokesperson said the military is closely watching activities related to a possible launch.

Experts in Seoul say North Korea could launch a mid-range missile or a new kind of ballistic missile.

Shin In-Kyun is a defense expert who says, "The no sail zone is quite expansive and I believe that is because Pyongyang intends to fire a Rodong missile." North Korea's mid-range missile is able to travel 1,300 kilometers.

But a South Korean official who asked to remain unnamed told VOA that North Korea declared no-sail zones several times in the past few months. It did not, however, follow with a missile launch.

Please let us know your thoughts in the Comments section or on 51VOA.COM, thanks!

zone – n. an area that is different in a particular way

channels – n. a path for communication from one group to another

speculate – v. to make a guess about something without have all the information about it