Update Required To play the media you will need to either update your browser to a recent version or update your Flash plugin.
By John Russell
04 December 2021


Every year, workers put up a big, freshly cut evergreen tree in a historic building in Asbury Park, New Jersey to celebrate Christmas. The Grand Arcade at the Convention Hall rises above the town's boardwalk, a walking path along the Atlantic Ocean.

But recently workers put up a very different kind of Christmas Tree in the Arcade. Unlike an evergreen, it requires little care and can never die. That is because the 2021 Christmas Tree is made wholly of a thick and strong paper material called cardboard. When the winter holidays end, the "tree" is to be recycled. 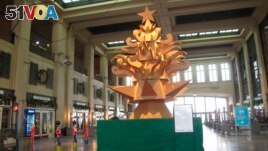 Opinions on the tree are mixed.

"I like that it's different...It's pretty interesting," said local man Chris Trifari. He lives in Neptune, a neighboring town.

Local Elizabeth Khimitch offered similar praise. "I think it's very creative." She had come to the Grand Arcade to take pictures of her dogs in front of the tree.

Others on the boardwalk were not as pleased by the tree.

Anthony Solimando said it looked "like an Amazon package."

"Not a fan," added Amy Mackey. "Asbury has conformed into this artsy town, but tradition is tradition! This is art, and I wouldn't take my child's picture in front of this tree. Can't we just have our traditional tree?"

The change came about this year when the city's art community contacted Madison Marquette, the private owner of the Asbury Park boardwalk. They asked about creating a Christmas tree sculpture for Convention Hall, said Austin Leopold, the manager of the property.

Leopold said the property company "passionately embraced" the idea for the sculpture. He said it honors the boardwalk's image as a center for Asbury Park's arts and music community.

Michael Lavallee, a local artist who goes by the name Porkchop, created the piece with Brad Hoffer. They call it The Giving Tree.

He said the company told him there would not be a natural Christmas tree at Convention Hall this year.

"I was asked to come in and do something festive-ish," said Porkchop. Festive means celebratory, especially in connection with a holiday.

Porkchop said he did not want to take away anyone's Christmas tree. He added, "If you're not going to give people the big tree they want, some of them are going to hate it. I understand that. But they weren't going to get that traditional Christmas tree anyway."

The piece uses natural and artificial lighting to darken parts of the tree while shining light on others. In this way, the piece's appearance changes throughout the day.

Amy Quinn is Asbury Park's deputy mayor. Quinn said that the city is not involved in the Convention Hall decisions, but that she likes the piece.

"I love the take that the local artists had on the tree," she said. "I love that it's different. Love it or hate it, people are talking about it."

Wayne Parry reported on this story for the Associated Press. John Russell adapted it for Learning English. Caty Weaver was the editor.

conform – v. to do what other people do : to behave in a way that is accepted by most people

passionately – adv. having, showing, or expressing strong emotions or beliefs