Actor: ‘I Didn’t Pull the Trigger’ in Deadly Movie Incident

Update Required To play the media you will need to either update your browser to a recent version or update your Flash plugin.
By Dan Novak
02 December 2021


Actor Alec Baldwin says he did not pull the trigger of a gun when it fired, killing a worker during the filming of a movie.

"I would never point a gun at anyone and pull the trigger at them," Baldwin said.

Baldwin spoke with ABC's George Stephanopoulos on a program that was broadcast Thursday. 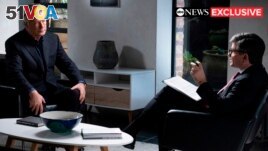 The discussion marked the first time Baldwin has spoken to a reporter about the shooting incident. It took place on October 21 at a movie set in the state of New Mexico. Baldwin was filming the movie Rust at the time.

ABC released part of the program on Wednesday. It shows Baldwin crying while describing Halyna Hutchins, the cinematographer who was shot and killed in the incident. Director Joel Souza was also wounded.

Baldwin told Stephanopoulos that he had "no idea" how a live bullet got on the movie set. He said it was not supposed to be on the property. Officials have said Baldwin was told the gun was safe to use.

Police in the city of Santa Fe are investigating the incident. They want to know how a real bullet ended up in the gun and how other live bullets got onto the set. Guns used in movies, called prop guns, use blanks, which look and sound like real gunshots when fired. But they do not fire bullets.

Police described "some complacency" in how weapons were dealt with on the Rust set. But they have said it is too soon to determine whether arrests will be made.

Court documents on Wednesday showed that police found live bullets from a local supplier of movie props and weapons.

Two workers on the film have brought legal action against Baldwin, the producers and others involved in the film. They are accused of having poor safety requirements on the set.

Lisa Torraco is the lawyer for Rust assistant director Dave Halls. She said in a television interviews that Halls agrees with Baldwin's account of the story.

"Dave has told me since the very first day I met him that Alec did not pull that trigger," Torraco said. "His finger was never in the trigger guard."

Torraco did not say what Halls may have told her about what he had seen in the seconds before the gun was fired.

Baldwin is best known for playing a TV executive on the comedy "30 Rock." He was the star and a producer of Rust.

Dan Novak adapted this story based on reports from The Associated Press and Reuters. Mario Ritter, Jr. was the editor.

trigger — n. a lever on a gun that you pull to fire the gun

cinematographer — n. a person whose job it is to film movies

end up –v. (phrasal) to reach or come to a place, condition, or situation that was not planned or expected

complacency — n. a feeling of being satisfied with how things are and not wanting to try to make them better