Update Required To play the media you will need to either update your browser to a recent version or update your Flash plugin.
By Ashley Thompson
19 November 2021


The children's television series Sesame Street is getting ready to welcome a new friend.

Ji-Young is joining the neighborhood filled with puppets, known as Muppets. She will be the first Asian American Muppet on Sesame Street. The program has been broadcast for 52 seasons. 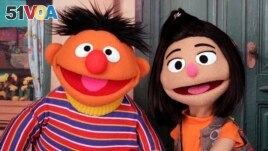 Ernie, a muppet from the popular children's series "Sesame Street," appears with new character Ji-Young, the first Asian American muppet, on the set of the long-running children's program in New York on Nov. 1, 2021. (AP Photo/Noreen Nasir)

Reporters with the Associated Press recently got to know Ji-Young and her story.

Ji-Young is seven years old. She is Korean American. She has two favorite activities: playing her musical instrument, an electric guitar, and going skateboarding.

She explained the meaning of her Korean name this way. "Ji means, like, smart or wise. And Young means, like, brave or courageous and strong," Ji-Young said. "But we were looking it up and guess what? Ji also means sesame." Sesame is a kind of small seed. It is also, of course, in the name of the program.

Ji-Young will officially be introduced in "See Us Coming Together: A Sesame Street Special." The television special will be broadcast on HBO Max on November 25. That is the same day as the American Thanksgiving holiday.

It will also be available on Sesame Street social media services and local public television stations in the U.S. Simu Liu, Padma Lakshmi and Naomi Osaka are among the famous people appearing in the special.

Some of Ji-Young's personality comes from her puppeteer – the human behind her performance.

Her puppeteer is Kathleen Kim, who is also Korean American. She is 41 years old. She got into puppetry when she was in her 30s. In 2014, she was accepted into a Sesame Street workshop. The next year, she became part of the team.

Being a puppeteer on the show was a dream come true for her. And helping shape a new Muppet is extraordinary.

"I feel like I have a lot of weight that maybe I'm putting on myself to teach these lessons and to be this representative that I did not have as a kid," Kim said.

Ji-Young's appearance is the result of many discussions following the events of 2020. Among them was a rise in reports of anti-Asian hate crimes.

Those working for Sesame Street thought about how the show could "meet the moment," said Kay Wilson Stallings. She is executive vice-president of Creative and Production for Sesame Workshop, the nonprofit organization behind Sesame Street.

Sesame Workshop established two task forces — one to look at its content and another to look at its own diversity. What developed was Coming Together, a major project centered on how to talk to children about race, ethnicity and culture.

One result was eight-year-old Tamir. While he was not the show's first Black Muppet, he was one of the first to talk about subjects like racism.

These newer Muppets — their personalities and their looks — were created in just a few months. The process normally takes at least several years.

Kim said it was important to her that Ji-Young not be only "pan-Asian." In other words, she wanted Ji-Young to be identified as Korean American, and not an Asian puppet that could be from anywhere.

"Because that is something that all Asian Americans have experienced," Kim said. "So it was very important that she was specifically Korean American, not just like, generically Korean, but she was born here."

One thing Ji-Young will help teach children is how to be a good "upstander." Sesame Street first used the term on its "The Power of We" TV special last year. That show also included the Muppet Tamir.

Stallings said: "Being an upstander means you point out things that are wrong or something that someone does or says that is based on their negative attitude toward the person because" of their race or culture.

In "See Us Coming Together," Sesame Street is preparing for Neighbor Day, when everyone shares food, music or dance from their culture. Ji-Young gets her feelings hurt after a child tells her "to go back home." But Ji-Young feels better after other Asian Americans, stars appearing on the program and friends like Elmo tell her that she belongs as much as anyone else.

Ji-Young will appear throughout the show's 53rd season next year, Stallings said. She will not be used only for subjects related to race.

Vanessa Leung is co-executive director of Coalition for Asian American Children and Families. The organization was not involved in Ji-Young's creation. But in the past it has helped develop anti-racism material for Sesame Workshop.

puppet –n. a doll that is moved by putting your hand inside it or by pulling strings or wires that are attached to it

skateboard –n. a short board that is on wheels and that a person stands on to move along a surface or to perform tricks; --v. to ride or perform on a skateboard

diversity –n. the state of having people who are different races or who have different cultures in a group or organization

specifically –adv. in a definite and exact way

generically –adv. in a general way

negative attitude –n. centered on what is bad about people or things