Update Required To play the media you will need to either update your browser to a recent version or update your Flash plugin.
By Caty Weaver
12 November 2021


The Apostolic Library in Vatican City is home to ancient writings, rare books and reading rooms. Now, it is opening a small new space to the public where modern-day artwork can be seen next to the library's treasures.

The first show at the space is called Tutti, the Italian word for all. It was suggested by Pope Francis' 2020 letter called "Brothers All." The message appealed for environmental renewal, greater human unity and a more just socio-economic order in the world after the COVID-19 crisis.

Artist Pietro Ruffo of Italy's capital, Rome, was invited to design the first show. Maps and migration are among the common subjects of his work. At the Library, he transformed one room into a tropical forest. In another room, Ruffo designed a modern version of one of the library's ancient maps of the Nile River. He placed both maps side by side.

The leader of the Roman Catholic Church and Vatican City ruler, Pope Francis, opened the Apostolic Library's new space last week. Pope Francis said the world was in need of new maps after COVID-19. He called for a greater sense of fraternity, or brotherhood.

"Humanity needs new maps to discover the sense of fraternity, of friendship and the common good," he said. "We need a new beauty, that isn't the usual reflection of power of some but a courageous mosaic of everyone's diversity." 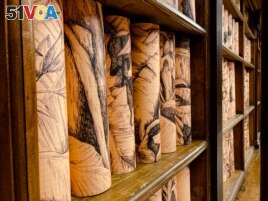 The estate of former U.S. businessman Kirk Kerkorian paid for the project. Early in his time as pope, Francis had appealed for the Apostolic Library to open itself up more to the outside world. In 2016, Francis declared the papal summer home in Castel Gandolfo open to visitors.

The exhibit at the Apostolic Library is open Tuesdays and Wednesdays. The current show will close February 22, 2022. Visitors must seek admission through an online request. The price of admission is about $17.

The Apostolic Library is separate from the Vatican Apostolic Archives, which is home to all the documentation from papal headquarters and embassies. Both the library and the archives are open to researchers upon request.

The Associated Press reported on this story. Caty Weaver adapted it for VOA Learning English. Mario Ritter, Jr. was the editor.

transform – v. to change something completely often in a good way

reflection – n. something that shows the effect, existence or qualities of another thing

mosaic – n. something made up of different things that together form a design — usually singular