Chinese Students Flock to US High Schools in Soaring Numbers

Update Required To play the media you will need to either update your browser to a recent version or update your Flash plugin.
By VOA
17 September, 2014
51VOA听写整理，转载请注明出处。文本仅供参考，欢迎纠错！

Students from China have a long history of coming to the United States for education. And this month, American educators expect high schools across the U.S. to enroll more Chinese students than ever.

17-year-old, Grace Liu is one of about 30,000 Chinese citizens at American high schools. She grew up in Tianjin, a city of 14 million people on China's east coast. This fall, she is starting her third year of high school in the Southeastern United States. 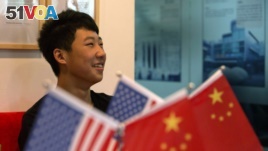 FILE - 16-year-old Zhang Kaisheng smiles near Chinese and U.S. national flags at the lobby of Focus Education, a tutoring and consulting agency in Beijing.

Grace attends Rabun Gap Nacoochee school in Rabun Gap, a small community in the State of Georgia. She sounds very happy with her surroundings.

Anthony Sgro heads the Rabun Gap School. He says Chinese applications or requests to attend the school have risen sharply.

"First couple of students came to the United States in 1980s. And they have come in significantly, significantly great numbers in the last 15 years," said Sgro.

Many of the students are from China's growing middle class, they want a good education and an advantage -- a better chance to complete for places in America's most respected universities.

Attending schools outside China also means an escape from the intense competition at schools inside China. Memorization by rote is common there. This method of learning through memory exercises uses up a lot of time. It can keep students from taking part in sports or interest groups.

In addition, Chinese students in the U.S. do not face the Chinese examination Gaokao. It is designed to measure a student's ability to do college work. Many students in their home country worry about this difficult test.

Anthony Sgro says some of Rabun citizens have expressed displeasure about the young Chinese arrivals.

"That was the argument when the Chinese started coming in large numbers. ‘Why are we educating our enemies?' And my response to people around this is the world in which we grew up in is very different from the world these students are growing up in today," said Sgro.

Mr. Sgro says his students see stories about China when they open a newspaper or watch television news. He says they also will know five students from that country. 17-year-old, Yvette Yang, says she and her Chinese classmates are part of a new future.

The number of international students attending university in the United States is also reaching record numbers. 800,000 foreign students were studying at American colleges in 2012.