Update Required To play the media you will need to either update your browser to a recent version or update your Flash plugin.
By Anna Matteo
16 September, 2014

A top health expert warns that the whole world needs to help deal with what he calls the "first Ebola epidemic the world has known."

Tom Frieden, director of the U.S. Centers for Disease Control, spoke to reporters at the C.D.C. headquarters in Atlanta, Georgia. He warns that the Ebola spread in West Africa will expand greatly over the next few weeks. He says a massive global effort is needed now to contain the disease.

Doctor Frieden just returned from a visit to the most affected countries: Sierra Leone, Guinea and Liberia. He says Ebola cases continue to increase quickly even though health care workers are working extremely hard against the spread. 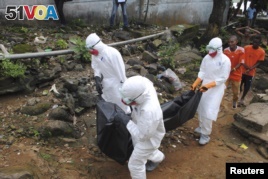 Health workers remove the body of a 29-year-old man who local residents say died of Ebola in Monrovia, Liberia, Sept. 11, 2014.

Doctor Frieden says the number of Ebola cases is now more than 3,000. He adds that this number is expected to rise quickly in coming weeks.

He warns that there is a window of opportunity to stop Ebola. But he adds that window is closing.

"There is a window of opportunity to tamp this down, but that window is closing. We need action now to scale up the response."

The C.D.C. chief says the Ebola virus is spreading in two ways: from patients to care givers and through unsafe treatment of the dead.

"It's spreading from just two roots; people caring for other people in hospitals or homes and unsafe burial practices where people may come into contact with body fluids from somebody who's died from Ebola. That is really the Achilles' heel (weakness) of this virus. We know how it spreads. We know how to stop it from spreading. The challenge is to do that everywhere it's needed."

Before leaving for Europe, President Obama videotaped a message for the people of West Africa.

"On behalf of the American people, I want you to know that our prayers are with those of you who have lost loved ones during this terrible outbreak of Ebola." 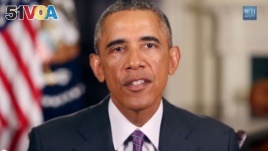 Mr. Obama says he hoped to clear some of the misunderstanding about the spread of Ebola. He says infection only comes through contact with an infected person or the body fluids of someone who has died of Ebola.

"That's why the disease is continuing to spread where patients are being cared for at home or during burials when family and friends lay their loved ones to rest."

He says people can respect their traditions and honor the dead "without risking the lives of the living."

Doctor Frieden warns that each day's delay in dealing with the Ebola spread makes it more difficult to stop. The CDC director says resources, technical experts and a worldwide, organized and unified plan are needed. He says Ebola is not only an African problem, but a world problem.

The president of the medical aid group Doctors without Borders (MSF) made similar comments at the United Nations. Joanne Liu said the world is losing the battle to contain Ebola. She spoke about the increasing chaos of the situation.

"Riots are breaking out, isolation centers are overwhelmed, and health workers on the front lines are becoming infected and are dying in shocking numbers. Others have fled in fear leaving people without care for even the most common illnesses (and) entire health systems have crumbled."

U.S. health officials have announced an agreement with a California-based drugmaker, Mapp Biopharmaceuticals. The deal calls for the company to speed development of the experimental Ebola medicine ZMapp. ZMapp has not been tested on humans. 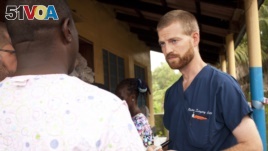 But, two American medical missionaries who got Ebola were treated with the drug and recovered. One of them, Dr. Kent Brantly, told NBC television he did not know he would survive.

"I don't think they (attending physicians) ever said, ‘Kent, you are about to die.' But I felt like I was about to die. And, I said to the nurse who was taking care of me, ‘I'm sick, I have no reserve and I don't know how long I can keep this up.'"

Mr. Brantly was released from Emory University Hospital in Atlanta. He said he is in "tearful prayer" for yet another American doctor who has been infected with Ebola while working in Liberia. The doctor of obstetrics, or childbirth, has separated himself from other people since the signs of the disease appeared.

window of opportunity – (idiomatic expression) a favorable time for doing something that must be done immediately if it is not to be missed.

chaos - (n.) complete confusion and disorder : a state in which behavior and events are not controlled by anything. Chaotic is the adjective.

riot – (n.) a violent disturbance of the peace by a crowd, "riots broke out in the capital;" v. take part in a violent public disturbance, "the people rioted in the streets."

obstetrics – (n.) the branch of medicine and surgery concerned with childbirth and the care of women giving birth.

missionary – (n.) a person who is sent to a foreign country to do religious work (such as to convince people to join a religion or to help people who are sick, poor, etc.)