Update Required To play the media you will need to either update your browser to a recent version or update your Flash plugin.
By VOA
12 August, 2014

Have you heard of "mindfulness meditation?"

Meditation, or deep breathing and quiet thinking, used to be found only at spiritual places and yoga centers.

But these days mindfulness meditation can be found almost everywhere in the United States – from offices to schools, from prisons to the military.

People who meditate, practice yoga and similar exercises are sometimes called "New Age." They are usually healthy eaters. Many New Age people do not eat meat. They may follow Eastern religions such as Taoism or Buddhism.

A New Age person may talk about being "in the moment." And that is at the heart of the Mindfulness Meditation Movement – thinking about the present, not the past and not the future.

The mindfulness movement has been around for many years. But now it is being called a revolution. Supporters say this revolution may reduce tensions, stress and improve the body, mind and spirit. 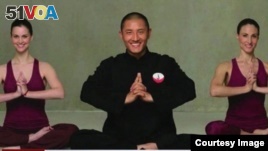 Are you tense? Stressed out. Take a deep breath and read on about how Mindfulness Meditation can help. (2014)

For example, think about what can be a sometimes stressful situation – a visit to the doctor, especially the dentist. 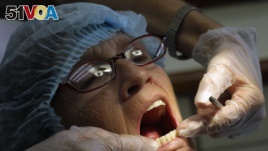 Many people do not like sitting in a dentist's chair. (2012)

Sitting in a dentist's chair can make a person feel worried and tense. You might be surprised to hear that the dentist can feel this way too.

Alona Bauer is a dentist in Washington, D.C. She describes how her working environment can be tense.

"So, there is definitely stress. You work in a small environment and it's very exact. It's very precise. Plus you're managing the patient as a comfort. So, there's great stress right there."

Ms. Bauer practices mindfulness meditation at a yoga center in Washington, D.C. to help to reduce her nervous tension or stress.

Hugh Byrne has been teaching mindfulness meditation since 2000. He says being mindful is all about thinking about the present.

"So as you sit here or lie here, see if you can open to whatever you're experiencing right now ..."

Mr. Byrne says that some forms of meditation are about clearing the mind of all thoughts. Mindfulness meditation, he says, is not. It is about being aware of the here-and-now. 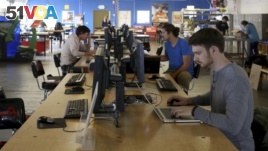 Americans work more and have less vacation time than people in most other developed countries. Daily travel to work and school can be long and difficult.

The pressures of emails, texts and social media make it harder and harder to unplug or shut off. But shutting off is part of the "Mindful Revolution."

Critics, however, say "mindful meditation" is temporary popular interest, what we call a "fad." They say it ignores the moral substance of the ancient Buddhist tradition of meditation.

Mr. Byrne does not agree. He says mindfulness meditation is a way for anyone to reduce pressure, tension and stress. He calls it a broad doorway.

" ... a broad doorway for people to come in ... people who might say, ‘I'm not really interested in Buddhism or Eastern spirituality. But I do want less stress. I do want less anxiety.'"

Studies show that young Americans increasingly consider themselves "spiritual but not religious." Mr. Byrne says mindfulness is for them as it is for Ms. Bauer who grew up in the former Soviet Union. She says religion was not part of her childhood. But now she says she is thinking of trying Buddhism.

And how is the stressed out dentist after half an hour of mindfulness meditation? Ms. Bauer says the exercise helped stop the noise, or as she puts it, "chatter," in her head.

"It was just chatter, you know, chatter, chatter. Energy, very jittery energy, inside my body (and) tension and now I feel like almost I'm speaking slower, my body's more relaxed, my heartbeat is slower.

And that is the VOA Learning English Health Report. I'm Anna Matteo.

Do you practice some form of meditation? How do you live in the present? Or are you stressed out and need a mindfulness mediation break? Let us know in our comment section where you can practice your written English.

This report was adapted into Special English by Anna Matteo from a story by VOA's Jerome Socolovsky. The production music titled "Harappa" is not available for download or purchase.