Update Required To play the media you will need to either update your browser to a recent version or update your Flash plugin.
By Dan Friedell
21 May 2022


Christina Howard, Alex Mayeri and Griffin Kornaker are members of the college class of 2022 who mainly feel good about their college experience.

Their time in college was affected by the COVID-19 pandemic when education officials shut down most college campuses in March 2020.

For over two years, they attended school in a different way than they expected when they finished high school. 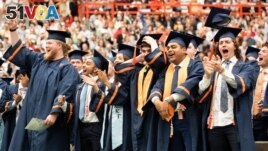 Students from the Syracuse University class of 2022 celebrate during their graduation ceremony in May. (Courtesy photo Ross Oscar Knight/Syracuse)

Mayeri and Howard spent the last four years in college. Kornaker finished in 2021 but completed an additional degree this year.

VOA spoke to all three to find out how the COVID-19 health crisis affected their college education and their lives.

Christina Howard will graduate in June from the University of Chicago. She plans to move to Philadelphia and work with an organization called Partners for Justice. The group helps poor people who are accused of breaking the law and need help understanding the legal system.

Howard said she did feel some frustration about the limits on her college time.

"I didn't, you know, ever imagine that it would be this much of my college experience would be kind of this weird, disjointed thing."

But she felt "lucky" that she had almost two full years of college before the pandemic restrictions started.

"It hasn't really disrupted my life in long-lasting ways," she said, noting that close family and friends never got seriously sick from the virus.

Howard said she probably would have started her work life doing a job like the one in Philadelphia even if the pandemic had not happened.

But she did say she thought "there were more possibilities before the pandemic." She thinks people who lead universities may be "glossing over" the feeling of lost opportunities that current students have.

Making the best of it

Alex Mayeri studied advertising and design at Syracuse University in New York state. He graduated in the middle of May.

He is still looking for a job. While he received some work experience at school, he did not have the chance to work in an advertising or design office during summers as he had hoped.

When pandemic restrictions closed businesses in March 2020, Mayeri was looking for a summer job at an advertising company in New York City. He did not get that chance. Instead, he got work experience with the sports communications office at his university.

The next summer, in 2021, he did have a chance to work for an advertising company. But he did not go into an office. Instead of feeling disappointed, Mayeri said he thought about one good result. He worked for an advertising company called Motive, based in Denver, Colorado. In normal times, he might not have been able to work there because it would have been too costly to spend four months living away from home.

Mayeri, however, did have some things he was unhappy about. For example, he noted that he would have liked to go to class in person during his third year. Most of that time was spent taking classes by video link. He also missed out on one important experience:

"The biggest thing that I would say about COVID to anybody was not being able to go abroad, travel for a study abroad program. That's the one thing going into college that I was probably looking forward to the most."

He called it "a sore subject," or something he didn't feel happy about.

But Mayeri completed his studies and he feels good about what he learned from his COVID college experience.

"I don't regret how anything happened, and I'm grateful for how things happened, because I don't think I would be as mature and as thoughtful and as developed..."

Griffin Kornaker was a star basketball player growing up near Rochester, New York. However, he did not think he was good enough to play at a college with a famous basketball team. So, he decided to attend Middlebury College in Vermont. Middlebury is a small college with a liberal arts study program. It also has a good basketball team that plays other small New England colleges like Amherst College, Williams College, and Tufts University, which are all in Massachusetts.

During his third year at Middlebury, Kornaker was one of the team's main players. The team was good, winning 21 of 27 games. One win came in the 2020 national tournament for small colleges.

About two weeks later, his college experience changed. Middlebury started teaching classes by video link. The next school year, 2020-2021, there was no basketball. Kornaker finished college with an economics degree. But he did not have a chance to play one more season with his basketball teammates.

"We would have been the best we'd ever been," he said.

Kornaker even had a job offer. But he turned it down to play basketball for one more season.

He decided to change schools and study for another degree in finance at Case Western Reserve University (CWRU) in Cleveland, Ohio. Since he did not play during his fourth year at Middlebury, he was permitted to play one more basketball season.

"It really was an academic decision," he said, noting that he did not want to go to just any school. He wanted to go to a school that would prepare him for his future job.

Kornaker was not the only new player at CWRU. There were two other college graduates who wanted one more chance to play. They came to Cleveland and joined some good players.

Kornaker was not sure how good the team would be.

"I just wanted to compete," he said.

By March 2022, CWRU finished its best season ever. The team won games against top academic schools like the University of Chicago and Carnegie Mellon University in Pittsburgh. And it won two games in the 2022 NCAA Tournament. During the season, the team won 20 of 27 games.

Kornaker said he always knew basketball was going to be a tool he could use to get a good education. Now he has degrees from two of the top schools in the U.S.

"I don't think I could have done it any better, so I have zero regrets. Of course, we hoped we would have won a couple more games, but I wouldn't take back any of my experiences."

In the end, all three students said they thought they would go on to have good lives. They were disappointed with some parts of their time in college during the pandemic. But they do not believe the last two years will be a long-term setback.

"I really do think it's been a good experience," Kornaker said. "Hopefully it's something we complain about when we're old and grumpy, and (the pandemic) is wrapped up by then."

Dan Friedell wrote this story for Learning English based on his interviews with college students.

frustration –n. feeling anger or unhappiness because of being unable to do something

disrupt –v. to be prevented from normal progress or acting in the normal way

gloss over –v. (phrasal) to treat a serious matter as though it were not important

liberal arts –n. areas of study (such as history, language, and literature) that are intended to give you general knowledge rather than to develop specific skills needed for a profession