Community Built for Foreigners in Dubai to Be Torn Down

Update Required To play the media you will need to either update your browser to a recent version or update your Flash plugin.
By John Russell
13 November 2021


Jebel Ali Village, in Dubai, is a group of homes built in the late 1970s for European port workers.

It has largely stayed the same over the years. Foreign residents still walk along quiet roads and play games at the clubhouse, a kind of gathering place.

But now, large building machines are coming to tear the buildings down.

Amanda James' British father first moved the family to Jebel Ali village in 1984. James, age 53, recently told The Associated Press, "I arrived here during the Iran-Iraq War. I stayed through both Gulf wars. ... We've had three generations. There's a history of people growing up, meeting each other, having their families right here."

In response to an Associated Press request for comment, Nakheel said it informed the residents of its plans and has met all legal requirements.

"We recognize Jebel Ali Village's importance to Dubai's history and its residents and, for this reason, have taken the decision to redevelop the community to preserve and enhance its longevity for many more generations to come," the company said. It argued that the planned pools, parks, sports courts and bike paths would bring residents together in new ways.

During the 1970s, American and European employees of international oil companies moved to towns in the Persian Gulf. The foreigners, known as expats, lived with their families in communities across the area.

Dubai did not have much oil, but used what it had to build Jebel Ali, the area's first major shipping center. Dutch and British port workers moved into houses nearby. As the neighborhood grew, a school opened. So did other places where residents met to tell stories over food and drinks.

Donna Dickinson, a 40-year-old from Norfolk, England, spent her teenage years in the village. She moved back with her family last year "to replicate for my children the childhood that I had."

"That sense of community is quite unique to this place," Dickinson said. Unique is a term that is used to describe something that is unlike anything else.

"When you're an expat, having a sort of history to a place is quite a difficult thing," Dickinson said, as her 7-year-old son played nearby. 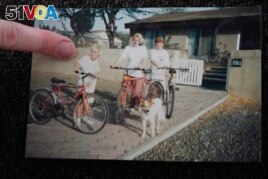 In this photo provided by Donna Dickinson, she poses with her brothers Steve, left, and Garry, right, and their dog Murphy in 1992 outside their home in Jebel Ali Village in Dubai, United Arab Emirates. (Courtesy of Donna Dickinson via AP)

Cory Rhodes is a 43-year-old community resident from the American state of Oregon. His home serves as his place of business as well as a home school for his daughter.

Rhodes told the AP he is sad that the housing development is going away. "The emotional feeling you get from living here –you're just not going to get it anywhere else," he said.

Amanda James wonders if Dubai may lose more than it gains by removing Jebel Ali Village.

"My hope is that young people today don't think Dubai is Disneyland – because it's not," she said. "It had so much depth."

Isabel Debre reported on this story for the Associated Press. John Russell adapted it for Learning English. Bryan Lynn was the editor.

preserve -- v. to keep (something) in its original state or in good condition

enhance – v. to increase or improve (something)

longevity – n. the length of time that something or someone lasts or continues

replicate – v. formal: to repeat or copy (something) exactly