EU Blames Belarus for Migrants Seeking to Cross into Poland

Update Required To play the media you will need to either update your browser to a recent version or update your Flash plugin.
By Bryan Lynn
09 November 2021


The European Union is blaming the government of Belarus for a group of migrants seeking to cross over into Poland.

Polish police published a video showing hundreds of migrants – including families with young children – camped just across the border in Belarus.

The migrants are mostly from the Middle East. Poland says the migrants are being urged to push their way into the country by the government of Belarus, led by President Alexander Lukashenko.

The situation was reported to be calm on Tuesday. But tensions were high along the border Monday, when some of the migrants tried to break down a border fence. Polish border guards blocked the migrants' entry into the EU. 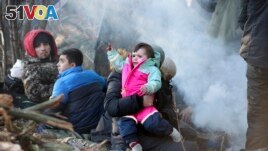 A man carries a child as he gathers with other migrants from the Middle East and elsewhere at the Belarus-Poland border near Grodno Grodno, Belarus, Nov. 9, 2021. (Leonid Shcheglov/BelTA via AP)

Polish Prime Minister Mateusz Morawiecki wrote on Twitter that it was in Poland's interest to keep the border closed. He added that the actions urged by Belarus' government threatened the "stability and security" of the whole EU.

Poland and other EU member states accuse Belarus of urging illegal migrants from the Middle East, Afghanistan and Africa to cross the border into the EU. The critics say Belarus is doing so in answer to sanctions placed on Belarus over human rights abuses.

Belarus, which is backed by Russia, denies the accusations. On Tuesday, its defense ministry called the accusations "unfounded." And the country's foreign ministry warned Poland "against the use of any provocations."

The European Commission (EC) accused Belarus of illegally offering migrants easy entrance into the EU through its territory.

An EC spokesperson said the Lukashenko government was acting in an "inhuman" way.

"He is lying to people, he is misusing people, misleading them, and bringing them to Belarus under the false promise of having easy entry into the EU," the spokesperson said.

In the Polish police video published on Twitter, tents and campfires can be seen in near-freezing temperatures. An announcement warned the migrants that crossing the Polish border is only permitted for visa holders at official border crossings.

Two United Nations refugee agencies – the UNHCR and International Organization for Migration – called the situation "alarming." The agencies said they had been in contact with both the Polish and Belarusian governments and urged them to make sure the large group in the area received humanitarian assistance.

For months, thousands of migrants have sought to illegally enter Poland. They have often ended up stuck in a forested area between Belarusian and Polish forces.

The Associated Press, Reuters and VOA News reported on this story. Bryan Lynn adapted the reports for VOA Learning English. Ashley Thompson was the editor.

stability – n. the quality of not being likely to change or move

sanction – n. a punishment for not obeying a rule or law

unfounded – adj. not based on facts

provocation – n. something you do that makes someone angry

tent – n. a structure made of metal poles and cloth that is fixed to the ground and used to provide cover and a place to sleep