Update Required To play the media you will need to either update your browser to a recent version or update your Flash plugin.
By Hai Do
18 March, 2016

Her parents came from Zimbabwe. She was born in the American state of Iowa. But her family moved back to Harare, Zimbabwe, when she was five years old. She returned to the United States for college and has lived there ever since.

"I was always in a hodgepodge of culture," she said. "There's no other identity I know, really."

The actress may be best known as Michonne, the zombie–killer in the television series "The Walking Dead." But when Gurira is not killing zombies, she is busy with other projects. 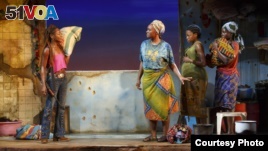 She recently played rapper Tupac Shakur's mother in a film. And she is now busy racing between theaters for two plays in New York City – plays that she wrote.

Stories from both sides of the Atlantic

Her play "Familiar" is an off-Broadway comedy-drama. It centers on the cultural clashes between American and African traditions.

The play takes place in the state of Minnesota. The eldest daughter of Zimbabwean parents is getting married to a white man. The story was taken from her own observations, Gurira said.

"I was at a wedding and I was just struck by all of my family's absurdities — and my own included. And I just knew I couldn't not write about it!"

The upper middle-class life of "Familiar" may seem familiar to many American audiences. But the setting of her play "Eclipsed" — Gurira's Broadway debut — is something else entirely.

Gurira decided to write "Eclipsed" after reading a New York Times story about the civil war in Liberia, and the young women who fought in it.

"These were, like, 22-, 23-year-old girls, women, who had, like, you know, little skimpy jeans on, little skimpy tops, and really looked cool and hip and current and then, they had these big AK-47s on their backs."

Gurira went to Liberia and met with women who were former soldiers, sex slaves and peace negotiators. She wrote the play based on their stories.

In "Eclipsed," Oscar-winning actress Lupita Nyong'o plays a 15-year-old girl who is trying to survive under the rebels. The girl is continually raped by a commander, but believes that she can find her freedom in the rebel army.

"Well, I think the girl is our way into this world," Nyong'o said. "She comes into this world and is trying to figure out what the rules are. And she has to make a lot of choices about how she intends to survive."

Theater critics have praised the play.

With two plays and movie, Gurira is still not slowing down. She is now working on a play about the women's movement in Africa.

Jeff Lunden reported on this story for VOANews. Hai Do adapted his report for Learning English. Ashley Thompson was the editor.

We want to hear from you. Write to us in the Comments section and on 51VOA.COM.

zombie – n. a dead person who is able to move because of magic usually in stories or movies

absurdity - n. the state of being silly, foolish or unreasonable

debut – n. the first time an actor, musician etc. does something in public or for the public