Update Required To play the media you will need to either update your browser to a recent version or update your Flash plugin.
By Jim Dresbach
17 July, 2016

Dengue is a disease carried by mosquitoes. It affects people who live in hot and humid climates of the world, according to the Mayo Clinic in Rochester, Minnesota.

Dengue causes sudden high fever, headaches and severe joint and muscle pain. There is no cure or vaccine for dengue fever.

An estimated 400,000 people are infected with dengue each year. Worldwide, an estimated 2.5 billion people are at risk of getting the disease.

Pakistan is making some progress in controlling dengue.

Researchers have created a computer process that uses helpline reports from the public.

The information is used to help forecast the number of cases. Public health officials then can take measures to limit the effects of dengue on a community. For example, public health workers can get rid of high populations of mosquitoes.

Lakshmi Subramanian is a teacher of mathematical sciences at New York University. He said the computer process is accurate. 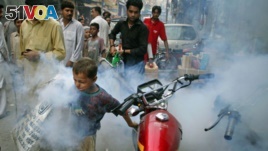 A boy tries to outrun a man fumigating for mosquitoes in an effort to combat dengue fever, on the streets of Lahore, Pakistan, September 20, 2011.

He added that an outbreak can be traced to neighborhoods and blocks where they started.

The helpline has been in operation for about five years.

The Pakistani province of Punjab was hit by a severe outbreak of dengue in 2011. More than 21,000 people were infected and 350 people died.

Hospitals in Punjab were unprepared and crowded with patients.

Since then, researchers in the United States and Pakistan developed the helpline. Almost 300,000 people have called the service with questions about the symptoms of dengue. They also report areas where mosquitoes are living.

Experts say the system is not costly. They say that in 2013 the number of dengue cases in the city of Lahore fell to 1,600 using information from the helpline and disease prevention efforts.

Jessica Berman wrote this story for VOANews. Jim Dresbach adapted it for Learning English. Mario Ritter was the editor.

helpline – n. a telephone service that offers help or information

dengue fever – n. a viral disease of the tropics, transmitted by mosquitoes and causing sudden fever and pain in the joints.

headache – n. an ache or pain in the head

forecast – v. to say that something will happen in the future

trace – v. to follow something back to its cause