Update Required To play the media you will need to either update your browser to a recent version or update your Flash plugin.
By VOA
15 July, 2016


The military in Turkey said Friday that it has taken control of the country.

In a statement, the military said it had "fully seized control" of the government.

However, Prime Minister Binali Yildrim told private NTV television Friday, "Some people illegally undertook an illegal action outside of the chain of command."

The prime minister said a small group, and not the entire army, was behind the events. 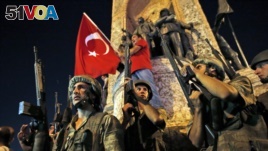 Turkish soldiers secure the area as supporters of Turkey's President Recep Tayyip Erdogan protest in Istanbul's Taksim square, early Saturday, July 16, 2016. Turkey's prime minister says a group within Turkey's military has engaged in what appeared to be an attempted coup. Binali Yildirim told NTV television: "it is correct that there was an attempt." (AP Photo/Emrah Gurel)

President Recep Tayyip Erdogan spoke with a local TV station on the video service Facetime. He urged the Turkish people to go to the streets.

Istanbul's two main bridges across the Bosphorus Strait separating Europe and Asia were blocked on Friday.

U.S. military and diplomatic officials are seeking more information about the situation in Turkey.

For the latest news about events in Turkey, go to the VOANEWS website.