Update Required To play the media you will need to either update your browser to a recent version or update your Flash plugin.
By VOA
12 May, 2016


Republican presidential candidate Donald Trump and U.S. House Speaker Paul Ryan pledged to work together despite their differences after a meeting Thursday.

The men said the meeting was a "very positive step toward unification."

Ryan, an important leader of the Republican Party, had said last week that he was "not ready" to endorse Trump. But now he seems more willing to work with Trump.

Many Republicans expressed their concerns as Trump moved closer to being the party's presidential nominee. They said his campaign does not represent traditional Republican points of view. 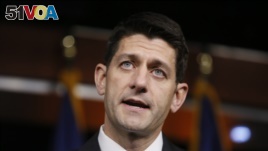 During the primary elections, Trump talked about deporting illegal immigrants, building a wall on the border between the U.S. and Mexico and banning Muslims from entering the U.S.

He also traded insults with other candidates, including Ted Cruz, John Kasich and Marco Rubio during speeches and debates.

Ryan said it was "one of the most divisive primaries in memory."

After the 45-minute meeting, Ryan called his time with Trump "encouraging" and "productive."

Both Trump and Ryan said they needed to find common ground. But it would be normal for them to have different policy ideas.

Trump also met Thursday with other Republican leaders in the House of Representatives and the Senate.

Dan Friedell wrote this story for Learning English based on reporting from the Associated Press. Hai Do was the editor.

Do you think Donald Trump will be able to work with the Republican Party? We want to know. Write to us in the Comments Section or on 51VOA.COM.

pledge – v. to formally promise to give or do (something)

unification – n. the act of joining people or things together

encouraging – v. to make (someone) more determined, hopeful, or confident

divisive – adj. causing a lot of disagreement between people, causing a split into different groups

deport – v. to force a person who is not a citizen to leave a country