Update Required To play the media you will need to either update your browser to a recent version or update your Flash plugin.
By Dan Friedell
10 May, 2016


The 2016 Invictus Games began this week in Orlando, Florida.

The games are a sports competition, similar to the Olympics, for former soldiers injured in combat.

Britain's Prince Harry started the games in 2014. He also served in the British military for 10 years. That time included two tours of duty in Afghanistan. At the end of his military service, he founded the games. 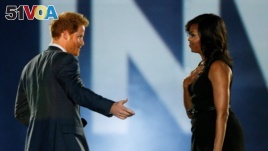 The first competition was in London. Harry said the games serve as motivation for wounded soldiers working their way back to health.

The games take place over five days and include 10 competitions. Closing ceremonies are May 12.

Fifteen countries are sending athletes to the event. They include Great Britain, the United States, Canada, Australia, New Zealand, Jordan and Afghanistan. More than 500 athletes are attending.

In a video message announcing the 2016 games, Prince Harry said the first games "focused the recovery of hundreds of wounded servicemen and women through sport ... and inspired many hundreds more."

In another video, Prince Harry says the goal is to use the Invictus Games as a way for wounded soldiers to "get up off the sofa, dare themselves to do something, whether it's sport, whatever it is."

William Reynolds is the captain of the team from the United States.

He was injured by shrapnel from a bomb in Baghdad, Iraq in 2004. Reynolds recovered well enough to return to duty, but had his left leg amputated in 2013.

Reynolds competed in short running and longer cycling events at the Invictus Games in 2014 and is competing in the same events this year.

In an interview with Fox Sports, he said competing at Invictus is a good goal for people recovering from war injuries. Getting ready for a competition provides purpose for people who may be tired of physical therapy.

The name Invictus comes from a 19th-century poem by English poet William Ernest Henley. It includes these lines: "I am the master of my fate: I am the captain of my soul."

Will you follow this year's Invictus Games? We want to know. Write to us in the Comments Section or on 51VOA.COM.

shrapnel – adj. small metal pieces that scatter outwards from an exploding bomb, shell, or mine

master – n. a man who is in charge

captain – n. an athlete who is chosen to be the leader of a team