Dreadnoughtus: A Giant Among Dinosaurs

Update Required To play the media you will need to either update your browser to a recent version or update your Flash plugin.
By VOA
12 September, 2014


The dinosaur lay undiscovered for perhaps 77 million years after it died. Then, in 2005, an American scientist found some of its fossilized remains in the Patagonia area of southern Argentina.

Kenneth Lacovara says the first bones he saw were just a collection of small pieces. But additional digging resulted in the recovery of huge bones. Mr. Lacovara is both a paleontologist and a geologist. He realized his find was something enormous. The dinosaur may be among the largest land animals that ever lived.

Mr. Lacovara is with Drexel University in Pennsylvania. He led an international research team that uncovered, studied and described the fossils of the huge dinosaur. Their work took place over a total of nine years. Their report on the creature, called a Sauropod, appeared in the journal Scientific Reports.

A Sauropod had thick legs and a small head, and grew to great heights. The paleontologist said the animal weighed more than 59,000 kilograms and was 26 meters long while it lived. He said its stomach was larger than a big horse. And this creature was young -- and still growing. Sudden major floods appear to have killed it. 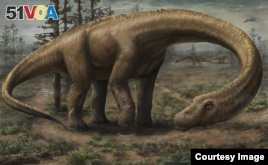 The research team now has 200 fossilized bones. That represents 45 percent of all bones in the body and 70 percent of those behind its head. The discovery gives the researchers a rare chance to study the structure, growth rate and movements of its species, a grouping known as titanosaurs.

Kenneth Lacovara named the dinosaur Dreadnoughtus schrani – "Dread", for short. The first name calls up images of huge battleships of a century ago. The second name honors Adam Schran, who provided donor support.

The scientist has said people often express surprise that the Dreadnoughtus ate plants. And it seems it had to eat a lot of plants to get enough food to survive and grow. He said the animal spent much of its day standing in one place. He noted that it probably could eat leaves from many trees without moving.

But Mr. Lacovara told Drexel University officials that the dinosaur could have been migratory. After eating all the plants in sight, it needed to move to new areas to find enough food to survive and grow.

In addition to bones, the researchers also found other body parts, including the remains of neck tendons and teeth. The countless objects fill most of Mr. Lacovara's laboratory at Drexel. The neck measured 11 meters. And the tail extended nine meters. That tail could serve as a powerful weapon when needed.

Dreadnoughtus did not need to kill other creatures to eat. But Mr. Lacovara does not think the big dinosaur was harmless. He said he would not have wanted to be closed into a room with it.