Libya Is Becoming a 'Terrorist Hub'

Update Required To play the media you will need to either update your browser to a recent version or update your Flash plugin.
By George Grow
11 September, 2014


President Barack Obama has proposed an expanded American military effort against Islamic State militants in Iraq and Syria. His plan is meant to answer the rising threat of Islamist extremism in the Middle East, including parts of North Africa.

Earlier this week, French defense minister Jean-Yves Le Drian warned that Libya could become what he called a terrorist center, or "hub". And he urged other countries to "mobilize" – to prepare for action.

The defense chief spoke to the French publication Le Figaro. He said that Libya's economic and political centers are now at risk of falling under the control of jihadist groups. Jihad is an expression for a war to defend or spread one's beliefs.

Mr. Le Drian added that southern Libya is a place where terrorist groups go to re-supply and reorganize.

The Associated Press reported that an Islamist-allied militia captured the capital, Tripoli, last month. The militia reportedly set up a government in opposition to the elected government. The Guardian newspaper says Libyan parliament members sought shelter on a Greek transport ship.

Mahmoud Jibril served as acting prime minister after the overthrow of Moammar Gadhafi. An advisor to Mr. Jibril told VOA that Islamic fighters have started to arrive in Libya. He also said the country could become a safe place for jihadists.

Ian Lustick is an expert on the Middle East. He teaches at the University of Pennsylvania. Professor Lustick told VOA that it was Gadhafi himself who warned the country would explode without a strongman at the top.

"He was right because he had a very easy time taking power. He pushed aside a kingdom that had not had to do any state-building in Libya. It had oil and it had American support. ... So when he was pushed aside, there had never been any preparation for a real state of Libya. That's fundamentally the problem."

Professor Lustick says competing tribes in Libya are excited about the possibility of getting very rich from oil sales. He says they are now fighting for control of the country.

Traditionally, he says, Islam offered a way to unite opposing sides in the Middle East. But the new government in Egypt and conservative Gulf states oppose creating an Islamic state in Libya. Ian Lustick says Western countries also oppose creation of such a state. So, he says, foreigners oppose the one possible solution for Libya. 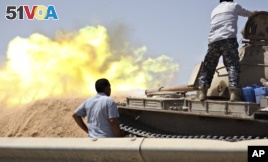 A tank belonging to the Western Shield, a branch of the Libya Shield forces, fires during a clash with rival militias around the former Libyan army camp, Camp 27, west of Tripoli, Aug. 22, 2014.
Mr. Lustick says he does not expect Egypt, the United States or NATO to get involved in the Libyan conflict. But he does think they will try to prevent what they do not want to happen in Libya.

For example, he says, the Egyptians do not want the Islamists coming to power. But he does not see a force willing to take the risks of entering Libya and organizing it.

"Of course, what this does is open the prospect of a Syrian-like struggle in a much more, you know, smaller country in terms of population. But it also opens the prospect of another field of operations for al-Qaida and ISIS-type extremists. If they don't take over, at least they have a playground and a training area where they will definitely have opportunities to attack targets and perhaps take hostages again."

Mr. Lustick says the West has no interest in intervening in Libya after its experiences at nation-building in Iraq and Afghanistan. He says the West is now paying the cost of ignoring Libya for years -- what he calls its "benign neglect."

*This report was based on a story from VOA reporter Victor Beattie. George Grow wrote it for Learning English. Kelly Jean Kelly was the editor.