Update Required To play the media you will need to either update your browser to a recent version or update your Flash plugin.
By Hai Do
17 February, 2019


Scientists have discovered the oldest fossil evidence of organism motility, or the ability of an organism to move independently. The discovery shows that development of motility began more than two billion years ago.

The fossils were found in Gabon, in rock called shale. Researchers described them as tube-like structures up to 170 millimeters long. They say the structures may have been created when the organisms moved through soft, wet dirt in search of food or a better environment.

The researchers also said the organisms might have been moving together as a group. The organisms remains a mystery as the fossils are a record only of their movement. 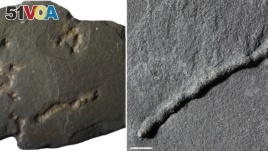 Tube-like structures found in black shale from a quarry in Gabon dating from 2.1 billion years ago. (Abderrazak Albani/IC2MP/CNRS/Universite de Poitiers/Handout via REUTERS)

The researchers said the fossils dated back to a time when Earth was rich with oxygen. These conditions permitted simple life forms to develop more complexity.

Life on Earth started with single-celled bacteria about 4 billion years ago. The earliest life forms could not move under their own power. The Gabon fossils dated to the Paleoproterozoic Era are about 1.5 billion years older than the previous earliest evidence of organism motility.

Abderrazak El Albani, a scientist with the University of Poitiers in France, led the team in Gabon. The shale deposit there has proven to be a treasure for the study of ancient life. Several years ago, Albani and his team discovered it held the oldest fossils know of multicellular animals.

"What matters here is their astonishing complexity and diversity in shape and size, and likely in terms of metabolic, developmental and behavioral patterns, including the just-discovered earliest evidence of motility, at least for certain among them," Albani said.

Scientists believe this early time in motility may have faced a setback soon after the Paleoproterozoic Era, about the time of the Gabon fossils. The Earth saw a considerable loss of atmospheric oxygen at that time.

The research was published in the Proceedings of the National Academy of Sciences.

Reuters News Agency reported this story. Hai Do adapted it for VOA Learning English. Caty Weaver was the editor.

fossil – n. something, such as a leaf, skeleton, or footprint, that is from a plant or animal which lived in ancient times and that you can see in some rocks

deposit – n. an amount of a substance, such as oil or coal, that exists naturally in the ground

astonishing – adj. causing a feeling of great surprise or wonder

metabolic – adj. of or relating to the chemical processes by which a plant or an animal uses food, water, etc., to grow and heal and to make energy