What Is 5G Wireless Technology?

Update Required To play the media you will need to either update your browser to a recent version or update your Flash plugin.
By Bryan Lynn
13 February, 2019


There has been a lot of publicity recently surrounding 5G, the next generation of wireless technology for the world. But what is this technology and how might it change our lives?

5G stands for fifth generation, meaning the next step in the progression of technology to replace the current 4G system. 4G was the replacement for 3G, which came after 2G, and so on.

These systems are wireless computer networks.

The new 5G system promises more of the same. It is expected to permit more users to do more things -- at a faster rate. Higher internet speeds and larger network capacity should result in better performance for device users connected to 5G.

However, technology experts say there is a major way that 5G is different than the earlier systems. It will move well beyond mobile network technology to affect many more devices and industries than other "G" versions. 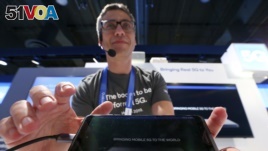 When will it be available?

Before we can all use 5G, wireless companies and phone makers will have to complete and deploy a whole new system. New phones and communication equipment must be built.

American wireless companies have been preparing for the new system for some time. They have been creating new network equipment and buying broadcasting space to carry 5G signals. They have built new 5G antennas to serve American cities and towns. Wireless providers will invest at least $275 billion in 5G-related networks in the United States, the industry group CTIA reported.

The first U.S. launch of 5G is expected to happen sometime this year. Industry experts expect it will take a few more years to go nationwide. It will take even longer to reach rural areas.

China is expected to launch 5G sometime in 2020, while European nations are likely to build their systems more slowly over time.

In the United States, the first 5G-ready phones should be available in the first half of this year. The first 5G iPhone, however, is not expected until 2020.

4G phones will work on 5G networks, but not at 5G speeds.

What are the security concerns?

More data -- and many more kinds of data -- will be traveling across 5G networks. Much of the data could contain private details about individuals, businesses or government organizations. The increased data flow would give internet attackers a lot more possibilities to steal and misuse data.

In addition, the wider use of a 5G wireless network means any breakdown of the system would have more widespread and severe results. Such difficulties could affect public safety as well as world economic activity.

Government system failures could create national security risks. A failure during a doctor's remotely guided operation could lead to the death of a patient. Or a network breakdown could cause self-driving vehicles to crash.

The 5G network has caused tensions between the United States and China. The U.S. government has urged American companies not to use Chinese technology in communications networks because of security concerns. It has also pressed other countries to ban Huawei, a Chinese telecom company, from building 5G networks.

U.S. officials have long suspected the Chinese government could use Huawei network equipment to help carry out spying activities.

Huawei has rejected such accusations.

Bryan Lynn wrote this story for VOA Learning English, based on reports from the Associated Press, Reuters, Agence France-Press and online sources. Ashley Thompson was the editor.

Are you looking forward to using 5G on your phone and in other areas of your life? Write to us in the Comments section, and visit 51VOA.COM.

capacity – n. the largest amount something can handle

remote – adj. far away from where something is happening

automation – n. the controlling of something using machines and not people