Update Required To play the media you will need to either update your browser to a recent version or update your Flash plugin.
By Hai Do
15 February, 2019


The American space agency NASA had expected its rover called Opportunity to operate on Mars for just 90 days. But the vehicle kept exploring for 15 years after landing on the red planet.

Opportunity landed on Mars in 2004. Scientists finally lost contact with the solar-powered vehicle in June 2018 during a severe dust storm on Mars. Engineers from NASA's Jet Propulsion Laboratory (JPL) sent more than a thousand commands, trying to re-establish contact. But they did not have success.

Zurbuchen said that, for many years, Opportunity has been "teaching us about Mars' ancient past as a wet, potentially habitable planet, and revealing uncharted Martian landscapes." 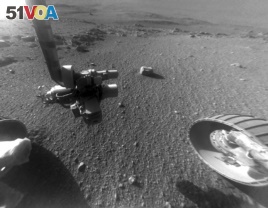 This Jan. 4, 2018 photo made available by NASA shows a view from the front Hazard Avoidance Camera of the Opportunity rover on the inboard slope of the western rim of Endeavour Crater on the planet Mars.

It took Opportunity seven months to travel from Earth to the Meridiani Planum area on Mars. It landed on January 24, 2004. Its twin rover, Spirit, landed 20 days earlier on the other side of Mars. Spirit's mission ended in May 2011.

From the day that Opportunity landed, a team of mission engineers and scientists on Earth worked to move the explorer around -- and at times over -- rocks and boulders. It climbed huge hills, explored craters and traveled across dry riverbeds.

Along the way, Opportunity sent more than 217,000 images. It examined 52 rocks, found fresh minerals and discovered signs of water flowing at a place called Endeavour Crater. It was similar to a lake on Earth.

Steve Squyres of Cornell University works on the rovers' science payload. He said, "From the get-go, Opportunity delivered on our search for evidence regarding water" on Mars. He added, "if you look to [Mars] ancient past, you find compelling evidence for liquid water below the surface and liquid water at the surface."

It was not always easy for Opportunity.

The rover lost the ability to fully control one of its front wheels in 2005. It was almost disabled in two sand storms. And in 2015, Opportunity lost the use of its flash memory. Two years later, the rover lost control of its other front wheel.

Each time, Opportunity's team on Earth found a solution that let the rover keep going. However, last summer's dust storm proved to be too much. Opportunity's final resting place was in Perseverance Valley.

Opportunity was the fifth NASA rover to successfully land on Mars. Only two are still operating. The Curiosity has been exploring Gale Crater since 2012. And the Insight just landed last November.

The United States, China and Europe are planning to send three more rovers next year.

NASA Administrator Jim Bridenstine said the goal is to search for evidence of life on Mars and, possibly, to send astronauts in the 2030s.

Bridenstine said, "It is because of trailblazing missions such as Opportunity that there will come a day when our brave astronauts walk on the surface of Mars."

Hai Do adapted this story for Learning English based on reports from NASA and the Associated Press. Ashley Thomson was the editor.

rover - n. a vehicle used for exploring the surface of a moon, planet ...

habitable - adj. suitable or fit to live in

revealing - adj. giving information about something that was not known before

crater - n. a large round hole on the ground

trailblazing - n. a person who makes, does, or discovers something new