Update Required To play the media you will need to either update your browser to a recent version or update your Flash plugin.
By VOA
21 June, 2015


Egyptian officials are making plans to open a newly-expanded Suez Canal on August 6th. Officials say the "new" canal will be more than double the waterway's earnings over the next 10 years. But some experts say the project alone will not be able to turn around Egypt's economy.

He says the project will cut in half the amount of time it takes to travel through the Suez Canal. He says this time savings will lower costs for shippers. 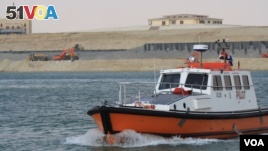 The expansion of the current canal means two ships will be able to sail by each other. Now, there is only enough room for one ship to pass through the waterway.

Admiral Mameesh says less than 10 years from now, the expanded canal will earn $13 billion a year.

Professor Andrew Lambert teaches naval history at King's College in London. He says the success of the canal will depend largely on the health of the world's shipping industry. He says that is something Egypt cannot control. And he says even if the expanded canal is successful, he does not think it will improve the lives of average Egyptians. People in Egypt are facing rising poverty rates and prices. The economy is slowly recovering from recent financial and political unrest.

"Egypt is a large, complex country with a very big population. It is highly unlikely it is going to be able to live off the kinds of incomes it will get -- even from two canals. The costs of governing Egypt are very large. It has major debt problems."

But officials say the economy is growing. And they say the canal is just one project that will both increase foreign investment in Egypt and create income for the country.

canal – n. a waterway that is designed so boats can pass through it

income – n. earnings; money that is earned from work, business or investments

complex – adj. of or having many parts that are difficult to understand; not simple.