Update Required To play the media you will need to either update your browser to a recent version or update your Flash plugin.
By Anne Ball
14 February, 2016

The waves were predicted as part of Einstein's General Theory of Relativity nearly 100 years ago. It was the theory of the physics behind the workings of our world and the universe.

The idea was that the waves are like ripples in space, caused by some of the violent and energetic processes in the Universe. For example, two black holes crashing into each other. 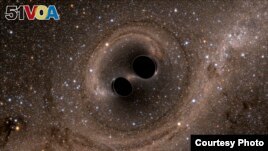 The collision of two black holes—an event detected for the first time ever by the Laser Interferometer Gravitational-Wave Observatory, or LIGO—is seen in this still from a computer simulation. (SXS)

Now a group of scientists, including ones from from CalTech, MIT and the LIGO Scientific Collaboration finally found the gravitational waves.

David Reitze is the executive director of the LIGO observatory at CalTech.

"We have detected gravitational waves. We did it! (applause)"

Reitze spoke with others at a press conference in Washington, DC this past week. The scientists announced they were able to see ripples in the fabric of spacetime.

This is what the waves sounded like. Listen for the "chirp" sound at the end:

It might be hard to understand, but those gravitational waves expand and contract space and time as they move through space. And when they get to the Earth, the waves pass through, and contract and expand the planet as the wave goes by.

It was Einstein who said these gravitational waves should be observable.

But these are not huge waves. They are very, very small, which is why it took so long to find them. You cannot see them with your eyes. They are smaller than the size of an atom.

How did the scientists find them?

They used a giant scientific tool called LIGO—which stands for the Laser Interferometer Gravitational-Wave Observatory. The billion-dollar LIGO project is two L-shaped observatories. One is in Louisiana and one in Washington state.

Their job was to watch for these gravitational waves. They have been looking on and off since 2002.

For years, scientists have been watching two black holes in another galaxy faraway. The two were spinning around each other, moving closer and closer together. When they finally crashed into each other, it was with such power and force, that gravitational waves rang throughout the universe, like a giant bell.

Those waves, traveling at the speed of light, finally reached the Earth, some 1.3 billion years later. They are the same waves that the scientists announced this past week.

The National Science Foundation tweeted that each of the black holes was thought to be 29 to 36 times the mass of our sun.

So, what does this discovery mean?

Abhay Ashtekar is a Penn State physicist, who was not on the discovery team. He said:

"Our understanding of the heavens changed dramatically."

What do you think of this discovery? We want to hear from you. Write to us in the Comments Section.

Journey of a Gravity Wave from LIGO Caltech

Two Black Holes Merge Into One

gravitational wave - n. a distortion or movement like a ripple in the space, caused by violent and energetic processes in the Universe.

ripple – n. a small wave or series of waves

black hole - n. in space, an object with so much mass, nothing, not even light can escape its gravity.

ripple in the fabric of space-time – phrase: wave moving through space

atom –n. the smallest particle of a substance that can exist by itself or be combined with other atoms to form a molecule

galaxy –n. any one of the very large group of stars that make up our universe

bell - n. a hollow object, typically made of metal, that sounds a clear musical note when struck