Emotional Night at Oscars for Best Actor Winner Will Smith

Update Required To play the media you will need to either update your browser to a recent version or update your Flash plugin.
By Dan Friedell
28 March 2022


It was an unforgettable Oscar night on Sunday in Los Angeles for actor Will Smith.

Smith won the Academy Award for best actor for his performance in "King Richard."

Only a few minutes earlier, Smith had walked up to the stage and hit presenter Chris Rock in the face with his open hand. Smith reacted after Rock made a joke about Smith's wife, Jada Pinkett Smith. 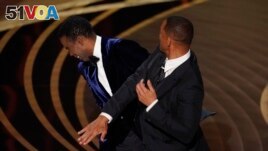 Will Smith, right, hits presenter Chris Rock on stage while presenting the award for best documentary feature at the Oscars on Sunday, March 27, 2022, at the Dolby Theatre in Los Angeles. (AP Photo/Chris Pizzello)

People in the audience – and television viewers around the world -- were shocked to see the dispute between two well-known performers on Hollywood's biggest night.

Rock said, "Jada, I love you. G.I. Jane 2, can't wait to see it." He meant that Pinkett Smith looked like she was preparing to star in the second G.I. Jane film. The 1997 film was about a woman who enters the military and cuts off her long hair.

After Smith hit Rock's face, he walked back to his seat. He then shouted at Rock to "keep my wife's name out your (blank) mouth." His yelling included a bad word.

In the United States, television viewers did not hear the sound during the dispute. The broadcaster had turned off the sound because of bad language. Viewers in other parts of the world heard the full exchange.

The television broadcast went to an advertisement. Actors Daniel Kaluyya, Denzel Washington and Tyler Perry talked with Smith and calmed the situation.

Not long after, Smith came back to the stage to accept his first Oscar for best actor. He used his acceptance speech to apologize for his earlier actions.

In "King Richard," Smith played Richard Williams, the father of American tennis players Venus and Serena Williams. Smith said in his speech that he, like Williams, "was a fierce defender of his family." He explained that was trying to protect his wife from insult.

Smith added that famous people usually have to "take abuse ... smile and pretend like that's okay."

Smith apologized to the organizers of the Oscars, but he did not apologize directly to Rock. He later said that Denzel Washington told him: "At your highest moment, be careful, because that's when the devil comes for you."

The organization that runs the Oscars is the Academy of Motion Pictures Arts and Sciences. The group said it was against "violence of any form."

Rock did not comment on the incident. Later, the Los Angeles Police Department said Rock had no plans to take legal action against Smith.

See more about the Oscars from VOA's live blog.

How are news organizations covering the Oscars where you live? What is the big story? Let us know. Write to us in the Comments Section and visit 51VOA.COM.

audience –n. the group of people gathered to watch an event

insult – n. to do or say something that is offensive to someone

devil – n. the most powerful evil spirit in the religion of Christianity, Islam and Judaism who is often shown as the ruler of hell