Update Required To play the media you will need to either update your browser to a recent version or update your Flash plugin.
By Dan Friedell
25 March 2022


The American movie industry will hold the Academy Awards, known as the Oscars, on Sunday in Los Angeles.

Some movie critics think CODA may be the first movie from a media streaming service to win the best picture award. CODA is about a deaf family with a daughter who can hear.

The movie was made by Apple TV+, Apple's streaming service. It won the top award from the Producer's Guild and Screen Actors Guild, two movie industry groups, earlier this year. 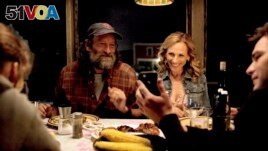 This image released by Apple TV+ shows Troy Kotsur, left, and Marlee Matlin in a scene from "CODA." (Apple TV+ via AP)

The first film from a streaming service to be nominated for best picture came in 2016. The movie was Amazon's Manchester by the Sea. That year, the winner was Spotlight, about the Boston Globe newspaper.

The main competition for CODA this year appears to be from Netflix, another streaming service. It is the film The Power of the Dog. That movie won the top award from three other movie industry groups this year.

Marlee Matlin is one of the main actors in CODA. She is also deaf. She won an Oscar for her performance in the 1986 film Children of a Lesser God.

"It would be great for a streamer to win, I think, because it just expands the landscape," Matlin said.

An Oscar win — even a nomination — lifts the financial performance of a movie. The media market research company Comscore follows movie ticket sales. It said ticket sales for Best Picture nominees Dune and King Richard each increased by about four times after being nominated.

Seven of the 10 films nominated for Best Picture can be watched using streaming services. The other three can be purchased or rented to watch at home. It is possible that, instead of ticket sales, the streaming services will gain more subscribers after Sunday's awards are announced.

Dune, West Side Story and Nightmare Alley are all available on HBO Max. A spokesperson for the service said all three movies recently had more people watching them. When Jessica Chastain was nominated for Best Actress, her film The Eyes of Tammy Faye had a 42 percent increase in viewers.

One movie business expert said 10 years ago the movie studios used "buzz" from award shows to get people to buy tickets. "Now," the expert said, "all of these streamers have something to gain."

Kerry Washington is one of Hollywood's top actors. Although more people are watching movies at home, she does not think "it is the death of anything." Washington said, "I think we're just having more and more options and ways to appreciate content."

Dan Friedell adapted this story for VOA Learning English based a report by Reuters.

Did you watch any of the Best Picture nominees in a movie theater? Which ones? Let us know. Write to us in the Comments Section and visit 51VOA.COM.

streaming –n. the act of continuously sending data (such as a movie or live performance) to a computer over the internet

landscape –n. an area of activity

ticket – n. a piece of paper or other thing that permits a person to see a show, performance or event

subscribe – v. to pay money to get a publication or service regularly

option – n. one of several choices

appreciate – n. to be happy or grateful to receive something