Update Required To play the media you will need to either update your browser to a recent version or update your Flash plugin.
By Caty Weaver
12 June, 2015


Two men escaped from a maximum-security prison in the American state of New York last Saturday, June 6. The escape received a lot of attention in American media and around-the-clock coverage on cable news networks.

It is hard to escape from prison in the United States. It is also fairly rare and getting rarer. The latest numbers show less than point two percent of the prison population escaped in 2012. That is about 2,500 people out of 1.3 million.

The number is not insignificant. But, it is a huge drop from twenty years earlier. In 1993, more than 14,000 prisoners escaped. And the entire U.S. prison population that year was about 780,000. 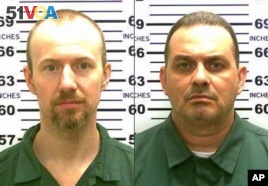 Some prisoners just walk away...

The most recent escape was especially shocking. Two men escaped from the Clinton Correctional Facility, a maximum-security prison in Dannemora, New York. The prison was built in the Adirondack Mountains in 1845. There have been other escapes from Clinton prison. But none of those escapees were free as long as the most recent, convicted murderers, David Sweat and Richard Matt.

While others have to dig through walls

The two men had cells next to each other. Each dug a hole through his cell and used power tools to cut through sewer pipes. On the night of the escape, they stuffed their bed coverings with clothes to make it look like they were asleep.

Investigators believe that the two travelled inside the walls of the prison along a narrow walk. Then they climbed down and made their way to sewer pipes and crawled to freedom through a manhole in a street in the town of Dannemora.

The men left a note on one of the pipes. It had a cartoon picture of an Asian person and the message, "Have a nice day."

The governor of New York, Andrew Cuomo, the news media and others have compared the Dannemora prison break to the 1994 Hollywood movie, "The Shawshank Redemption."

In that movie, Tim Robbins plays Andy Dufresne, a man found guilty of killing his wife and her lover. The character always says he is innocent of the crime. Andy spends many years in a prison in Maine before escaping through sewer pipes. And he also had a close friendship with another prisoner. But, unlike David Sweat and Richard Matt, Andy escapes alone.

Help from the inside

Police say Sweat and Matt had help from at least one prison worker. Joyce Mitchell is said to have developed a relationship with both men. She told police Matt made her feel "special." And, police say, the prison in the last 12 months investigated a report that Ms. Mitchell and David Sweat had become close.

Police say prison officials reportedly separated the two but did not find enough evidence to take any action against Joyce Mitchell.

Investigators say Ms. Mitchell had planned to drive the prisoners away after they were out of the prison. But she reportedly had a change of mind. She went to a hospital instead, suffering from a panic attack.

Police say Joyce Mitchell is cooperating with them in their investigation. They also say their investigation shows that she did not provide the prisoners with power tools. But they say she did bring illegal material into Clinton.

Ms. Mitchell is married to another worker at the prison. Her family has strongly defended her, saying she would not assist the escape. But, her former husband says Joyce Mitchell was unfaithful during their marriage and expects she is cheating now.

Police continue to search for the escapees. Search dogs picked up the prisoners' scent within a couple of kilometers from the prison. But it is not clear when in the last week the men might have been there.

Caty Weaver wrote this report for VOA Learning English. Hai Do was the editor.

convicted – v. to prove that someone is guilty of a crime in a court of law

sewer – n. a pipe that is usually underground and that is used to carry off water and human waste

unfaithful – adj. having a sexual relationship with someone who is not your wife, husband, or partner

How secure is the prison system in your country? We want to hear from you. Post your thoughts in the comments section.