The U.S. Agency for International Development is launching a competition to fight wildlife poaching and trafficking. USAID is asking people to submit ideas that use science and technology to reduce the illegal activities. The agency will pay the winner up to $500,000.

People or groups can write a short description of their ideas and submit them to wildlifecrimetech.org by the end of this month.

Michael Yates is the USAID mission director in Asia. He says individuals and organizations that fight the traffickers want help discovering where the criminals travel. They also want to learn ways to strengthen evidence against traffickers. And they want to learn how to reduce the demand for wildlife, as well as how to stop corruption. 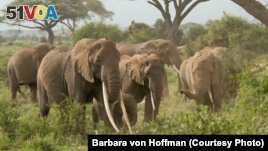 Poaching has made elephants an endangered species.

"They're all interlinked. And it's going to take concerted action in each one of these areas to really address this issue. And it's something that needs to be addressed with urgency. The trend lines are just enormously troublesome with respect to the increase in poaching."

Mr. Yates says every member of society must help if a solution is to be found. Governments cannot solve the issue on their own, he says. Instead, USAID is seeking ideas from the public.

USAID is working with the National Geographic Society, the Smithsonian Institution and the wildlife tracking network TRAFFIC on the project. The agency says an idea will be judged on its possible effect on trafficking and whether it can be used in large-scale actions against criminals. The strongest ideas will then be placed into the competition.

concerted – adj. done in a planned and deliberate way, usually by several or many people

address – v. to give attention to something; to deal with a matter, issue or problem

trend lines – n. (informal) a line indicating the general course or tendency of something; direction

How is your country fighting poaching and illegal wildlife trafficking? We want to hear from you. Write your thoughts in the comments section.