Update Required To play the media you will need to either update your browser to a recent version or update your Flash plugin.
By VOA
04 June, 2015


The United States military now says it might have sent live anthrax to 52 laboratories in the United States and three other countries. On Wednesday, a Pentagon official also said that number could rise.

Deputy Defense Secretary Bob Work said a wide investigation is continuing. The U.S. National Centers for Disease Control and the Pentagon are carrying out the investigation.

Two of the labs, one in Canada and one in Maryland, have confirmed the presence of live spores in the anthrax they received. The shipments went to 18 U.S. states and to Washington, D.C. South Korea and Australia also received shipments, along with Canada. 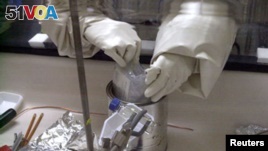 FILE - FBI and Army scientist examines a package for anthrax spores sent to Congressional office in 2001.

The U.S. military provides anthrax samples to labs for research purposes. But, normally a process called irradiation kills the bacterial product. Investigators are trying to learn what went wrong in the military's irradiation of some of the samples.

The Department of Defense first announced the problem shipments a week ago. At that time officials thought just nine labs were involved.

Anthrax is a bacterial disease that can cause several kinds of sickness depending on the method of infection. For example, breathing anthrax spores can cause severe lung problems. The disease can be deadly, but treatments can prevent infection and cure an infected person.

Deputy Defense Secretary Bob Work told reporters that "as of this point we see absolutely no danger to the broader American public."

The bacteria were irradiated at the Dugway army testing center in the western state of Utah. But later testing showed the process failed, and at least some anthrax spores remained alive.

Mr. Work said so far there is no evidence that suggests sending live anthrax spores was a deliberate act.

Some see anthrax as a desirable weapon of biological warfare because the bacteria create their own spores. The spores serve as strong, protective containers for the bacteria. Also, the anthrax vaccine is not widely available.

Another major anthrax incident happened in 2001, just a week after the September 11 terrorist attacks in America. Members of the U.S. Congress and several other organizations received letters containing the bacteria. Five people died of the disease. Seventeen others were infected but survived.
A federal investigation blamed a high-level bioscientist who worked for the U.S. military. Bruce Ivins died of an apparent suicide before he was charged with any crime.

No confirmations of anthrax infections connected to the recent problem shipments have been confirmed. However, several people involved are being treated with preventative medicines. The Pentagon has suspended all transport of the bacteria.

Last year, the Centers for Disease Control failed to kill an anthrax supply. The live bacteria were moved to an area where people were working without protective equipment. No one was infected in that incident.

Several U.S. lawmakers have expressed concern about the anthrax shipments. North Korea has sharply criticized the United States military for the incident.

spore – n. a cell made by some plants that is like a seed and can produce a new plant
sample – n. a small amount of something that gives you information about the thing it was taken from
package – v. to put something in a container in order to sell it or send it somewhere
deliberate – adj. done or said in a way that is planned or intended; done or said on purpose

Do you worry about the use of dangerous biological agents? Should governments possess and research such substances? We want to know what you think. Post your answers in the comments section.