Update Required To play the media you will need to either update your browser to a recent version or update your Flash plugin.
By VOA
02 June, 2015


United Nations investigators say there is growing evidence of Russian military involvement in the war in Ukraine. More than a year has passed since the start of fighting between the Ukrainian armed forces and pro-Russian rebels. This week, the U.N. human rights monitoring mission in Ukraine released its 10th report on the war. The report examines the situation during a three-month period, from February 16 to May 15.

Russia denies its soldiers are fighting in eastern Ukraine. Russian officials say those fighting with pro-Russian rebels are volunteers.

Ukraine's armed forces captured two Russians last month. Since then, the Russian government has refused to say they belong to the regular Russian army. But investigators who privately questioned the Russian soldiers last month reached a different finding. 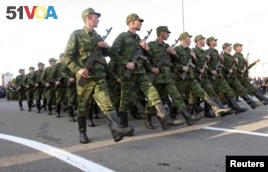 Pro-Russian rebels march during a rehearsal for the Victory Day military parade in Donetsk, Ukraine, May 5, 2015. (REUTERS/Igor Tkachenko)

Ivan Simonovic is the U.N.'s Assistant Secretary-General for Human Rights.

"There is increasing evidence that active servicemen from Russian Federation may be operating in Ukraine. In these cases, we have to be very cautious because the same persons who were visited are subject to national Ukrainian criminal investigation and they are charged with terrorism and, of course, those people are between a rock and hard place because also Russian Federation is closely watching what they are saying or not saying."

Mr. Simonovic says there also are reports of the Russian Federation providing fighters and modern, heavy weaponry to the rebels.

The U.N. report says more than 6,400 people were killed and nearly 16,000 wounded in eastern Ukraine from the middle of May 2014 through May 30 of this year. The report says this is a conservative estimate and the actual numbers are likely to be higher. It also says 1.2 million people are displaced internally. They were forced to flee their homes along the Russian border with Ukraine because of the fighting. U.N. officials say hundreds of thousands of others have sought refuge in Russia and other countries.

The report notes a decrease in what observers call indiscriminate shelling since the acceptance of the Minsk peace agreements on February 12. But it adds the shelling has not stopped, and civilians continue to live in fear.

The report also documents serious human rights abuses. Mr. Simonovic says there are claims both sides may be guilty of war crimes. He adds that documentation of such crimes is greater in rebel-controlled areas.

"By armed groups, there is an allegation of killings, torture, ill-treatment, forced labor, looting, ransom, extortion of money. For both sides, we have some allegations -- and in case of armed groups, some documentation -- of summary executions. For the governmental side, we have allegations that we still investigate and work on."

The report says human rights violations have continued in the Crimean peninsula since Russia claimed the area on March 4, 2014. It notes arrests, torture, and threats are continuing against political opponents, mainly members of the Crimean Tatar community.

Lisa Schlein reported on this story from Switzerland. George Grow adapted it for Learning English. Ashley Thompson was the editor.

mission – n. a group with a special job or project

indiscriminate – adj. affecting many people or things in a careless way