Update Required To play the media you will need to either update your browser to a recent version or update your Flash plugin.
By Dan Novak
07 September 2022


The European Union has proposed price controls on Russian gas. The group made the proposal Wednesday after President Vladimir Putin threatened to halt all energy supplies if the EU took such a step.

The price dispute raises the possibility of energy rationing in some of the world's richest countries this winter.

The rising tensions could cause European gas prices to rise even more. EU governments are planning to spend billions of dollars to support energy providers and to prevent citizens from going without heat this winter. 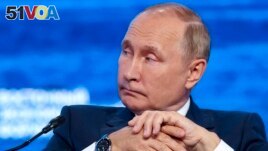 Europe has accused Russia of using energy supplies as a weapon in response to Western sanctions on Russia over its invasion of Ukraine. Russia blames those sanctions for causing the gas supply problem, which it says is a result of damaged pipelines.

Putin has said that energy contracts could be canceled if price limits are put in place. He also warned that gas supplies could be frozen.

But the EU plans to move ahead with price limits on Russian gas. The EU is also controlling the price of electricity from generators that do not use natural gas.

Ursula von der Leyen is the European Commission President. She told reporters: "We will propose a price cap on Russian gas... We must cut Russia's revenues which Putin uses to finance this atrocious war in Ukraine."

Putin said Russia would react to price caps by cutting off supplies.

There were signs of division among EU members over the plan to control prices. A Czech minister said it should not be discussed during Friday's meeting, saying it would not be helpful.

"It is not a constructive proposal... It is more another way to sanction Russia than an actual solution to the energy crisis in Europe," Minister Jozef Sikela said. The Czech Republic is helping to guide discussions as the current holders of the EU's presidency.

Kristian Ruby is the Secretary General of Eurelectric. Instead of price limits, he said EU governments should deal with the gas supply shortages and Europe's dependency on fossil fuels.

Europe's energy crisis has gotten more severe after an additional supply cut by Russia's state-owned Gazprom. The company fully suspended gas supplied through the Nord Stream 1 pipeline to Germany. Gazprom had said it found an engine leak in the pipeline last week.

Putin has rejected claims that Russia was using gas as a weapon. He said Western sanctions were affecting the supply of replacement parts. He said a shortage of parts was to blame for the pipeline not being operational.

ration — v. a set amount of something that the government lets you have because there is not enough of it

sanctions — n. (pl.) measures meant to force a country to obey international law by limiting or stopping trade with that country

cap — n. a limit on the price a seller can ask a buyer to pay

contradict — v. to not agree with

megawatt (hour) — n. a measure of electrical power equal to one million watts (during a period of time)

fossil fuel — n. a carbon-based fuel such as coal, oil or natural gas