Experts Dismiss Worry about US 'Murder Hornets' as Hype

Update Required To play the media you will need to either update your browser to a recent version or update your Flash plugin.
By Jonathan Evans
11 May 2020


Insect experts say people should remain calm about the large insect being called the "murder hornet."

The Asian giant hornets found in Washington state rarely kill humans. But they do kill whole hives of honeybees, which are already at risk.

Many bug experts told The Associated Press that what they call hornet "hype" reminds them of the 1970s public scare of Africanized honeybees. The insects, popularly called "killer bees," started moving north from South America. These more aggressive bees did make it up to Texas and the American Southwest. While the bees do kill people in rare situations, they did not live up to their fearsome name. 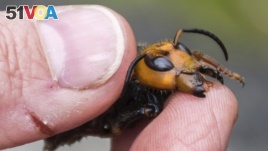 This time, it is hornets with a frightening-sounding name. Bug experts want that name to be dropped.

"They are not ‘murder hornets.' They are just hornets," said Washington Agriculture Department entomologist Chris Looney. He is working on the state's search for these large hornets.

Experts said two dead Asian giant hornets were found in Washington last December. A single live nest was found in Canada and destroyed last September. No live hornets have been seen so far this year.

Looney has a message for Americans: These hornets are not coming to get you. "The number of people who are stung and have to seek medical attention is incredibly small," he said.

Experts said this hornet is especially big — five centimeters long — so it does carry more and stronger poisonous substance.

But University of Illinois entomologist May Berenbaum said, "People are afraid of the wrong thing. The scariest insect(s) out there are mosquitoes. People don't think twice about them. If anyone's a murder insect, it would be a mosquito."

The World Health Organization says mosquitoes are responsible for millions of deaths each year worldwide. People die from malaria, dengue fever and other diseases mosquitoes carry.

In the United States, hornet, wasp and bee stings kill 62 people a year on average. That information comes from the U.S. Centers for Disease Control and Prevention.

In Japan, Korea and China, "people have co-existed with this hornet for thousands of years," said Doug Yanega. He is a scientist at the University of California Riverside Entomology Research Museum.

But bug experts across the country are getting worried calls from people who wrongly think they saw the Asian hornet.

"This is 99 percent media hype and frankly I'm getting tired of it," said University of Delaware entomologist Doug Tallamy. "Murder hornet? Please."

Bee expert Jerry Bromenshenk said in an email, "One nest, one individual hornet, hopefully, does not make an invasion. ... Do we want this hornet — surely not. But the media hype is turbo charged."

For bees and the people who depend on them for a living, Asian giant hornets could be yet another big problem. But it is not a big problem yet.

The number of honeybees in the U.S. has been dropping for years. The winter of 2018-2019 was one of the worst on record for bees. That was because of problems such as mites, diseases, pesticides and loss of food.

The new hornets would present a different problem. If they get into a hive, they tear the heads off worker bees and the hive mostly dies.

Asian honeybees have defenses for such an invasion. They start buzzing, raising the temperature in the hive and cooking the invading hornet to death. However, honeybees in America have no such defenses.

Seth Borenstein reported on this story for the Associated Press. Jonathan Evans adapted this story for Learning English. Ashley Thompson was the editor.

hornet – n. a flying insect that has a powerful sting

hype – n. promotional publicity of an extravagant or contrived kind

nest – n. a place where some animals live and usually lay eggs

sting – v. to hurt someone by piercing the skin with a sharp, pointed part that usually contains poison

frankly – adv. in an honest and direct way