Facebook's Plan to Send Thoughts from Brain to Computer

Update Required To play the media you will need to either update your browser to a recent version or update your Flash plugin.
By Bryan Lynn
21 April, 2017


Facebook is developing a technology that it says will be able to transfer thoughts directly from the brain to a computer.

It announced the plans this week at a gathering of the social network's developers in San Jose, California.

Speech-to-text technology has made great progress in recent years. Now scientists are looking to expand on this to develop a system for thoughts-to-text.

Facebook's vice president of engineering Regina Dugan introduced the technology by asking the question, "So what if you could type directly from your brain?"

Dugan said the aim of the project is to turn people's thoughts into text in order to communicate on a computer or personal device.

The company's goal is for users to be able to type at least 100 words per minute based on signals sent from their brains.

Facebook says the technology could be released within "a few years."

Dugan said other researchers say that people who are not able to use their hands have had success using similar technology.

People involved in testing of the technology at California's Stanford University had small electrodes put inside their brains. The electrodes were used to record signals from the part of the brain that controls muscle movements. These signals were then sent to a computer and translated into point-and-click commands.

Stanford researchers said experiments showed that people using the system were able to type up to eight words per minute.

Facebook has put dozens of people on a special team working on the technology. The company is also working with several U.S. universities to reach the goal of a thought-to-text rate of 100 words per minute. This is about five times faster than a person can type on a phone or other device.

Dugan said the Facebook system would not require implants inside the brain. Instead, users would wear something on their heads with sensors to pick up brain signals.

She added that the signals would only come from the area of the brain that translates thoughts into speech.

"We are not talking about decoding your random thoughts. That might be more than any of us care to know."

Facebook also announced it was working on another technology that could allow people to recognize words through their skin. Researchers say this technology would use skin instead of the ear to take in sound and send information to the brain.

"Imagine the power such a capability would give to the 780 million people around the world who cannot read or write, but who can surely think and feel." 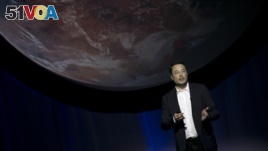 Facebook is not the only company studying technology to directly transfer thoughts from the brain to a computer. American businessman Elon Musk is launching a company to explore possible applications for brain interface technology.

Musk is the chief of electric carmaker Tesla and aerospace company SpaceX. He says his system would use implants to pick up brain signals that would go to computers and electronic devices.

Musk has spoken about his fears that robots using artificial intelligence (AI) could get too much power over people and possibly threaten humanity. He said one way to prevent this would be to add another AI element to the human brain.

Bryan Lynn wrote this story for VOA Learning English, based on material from Facebook and Reuters. Ashley Thompson was the editor.

type – v. to write on a computer keyboard or other electronic device

electrode – n. one of the two points through which electricity flows into or out of a battery or device

click – v. to press a button on a mouse or some other device

implant – n. something put in a specific place, like the body

decode – v. find or understand a hidden meaning in something