New Rotavirus Vaccine Could Save Thousands of Children

Update Required To play the media you will need to either update your browser to a recent version or update your Flash plugin.
By John Smith
02 April, 2017


Researchers in the African country of Niger have introduced a new vaccine that protects against the diarrheal disease called rotavirus.

A scientific test has shown that the new vaccine is effective, safe and easy to use. Experts believe it will be more widely used than the two rotavirus vaccines now given to children.

A killer without a good vaccine

The new vaccine is important because rotavirus is a serious illness that can lead to death. Rotavirus causes a severe infection of the gastro-intestinal tract. It kills more than 215,000 children each year -- about 600 a day.

Two vaccines against rotavirus are already available. However, they are costly and difficult to use.

They must also be kept cold. In many African countries where people suffer from rotavirus, refrigeration and electricity are unreliable.

As a result, the existing rotavirus vaccines are not widely used. 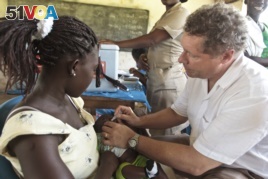 FILE - Chief executive of the Global Alliance for Vaccines and Immunisation (GAVI), Seth Berkley, vaccinates a child with a Rotavirus vaccine at the Nkyenoa health outreach point in the village of Nkyenoa April 27, 2012.

Researchers have been working on a new vaccine for rotavirus called BRV-PV. They recently tested the vaccine with young children in Niger.

Researchers gave 1,780 babies the BRV-PV vaccine. Only 31 cases of rotavirus developed in those babies.

In contrast, 87 cases of rotavirus developed among the babies who received a treatment but did not get the real medicine. In other words, those babies were given a placebo.

The researchers say the clinical trial shows that BRV-PV was nearly 67 percent effective.

The study was published in The New England Journal of Medicine.

Dr. Emmanuel Baron is the director of Epicentre, a research group that is part of Doctors Without Borders, an aid group. Epicentre researchers conducted the clinical trial.

The new vaccine does not need refrigeration for up to six months. Medical workers mix it with liquid and give it to babies three times: when they are 6 weeks old, 10 weeks old, and 14 weeks old.

Baron is happy the new vaccine is effective. But he wishes the success – or efficacy – rate was even higher.

"We would love to have 95, 98, 100 percent efficacy. But we know that all vaccines do not work very well in African countries for reasons that are still unclear, probably due to immunological disorders. But we also know that this efficacy of about 70 percent is higher than any other vaccine in similar settings."

The vaccine is expected to cost $6 for the three doses. The price will likely drop as more people are given the vaccine.

Baron says medical workers in countries where rotavirus is a serious health threat are waiting for the World Health Organization to approve the vaccine. Then, medical workers can start giving the new vaccine to children.

diarrheal – adj. related to an illness that causes you to pass waste from your body very frequently and in liquid rather than solid form

infection – n. the act or process of infecting someone or something : the state of being infected

gastro-intestinal tract – n. an organ system in humans and animals that takes in food, digests it and expels the remaining waste

refrigeration – n. the act of keeping something cold to keep it fresh

placebo – n. a pill or substance that is given to a patient like a drug but that has no physical effect on the patient

clinical trial – n. a scientifically controlled study of the safety and effectiveness of a drug or vaccine using consenting humans for subjects

effective – adj. producing a result that is wanted

conduct – v. to plan and do something

liquid – n. a substance that is able to flow freely

Immunological disorder – n. a disorder or problem with the immune system