Update Required To play the media you will need to either update your browser to a recent version or update your Flash plugin.
By Ashley Thompson
05 January, 2018

Michael Wolff's "Fire and Fury: Inside the Trump White House" describes a chaotic White House, a president who was not prepared to win in 2016, and Trump aides who question his intelligence and ability to lead.

Trump has dismissed the book, saying it is full of lies. 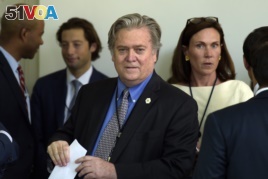 FILE - Stephen Bannon waits for President Donald Trump to make a statement about the U.S. role in the Paris climate change accord, June 1, 2017, in the Rose Garden of the White House.

"Fire and Fury" had been set to be released January 9. Instead, it began sales early. It is now the top-selling book on Amazon.com.

In Washington, D.C., people waited outside bookstores in extremely cold weather to buy the book. One popular bookstore, KramerBooks, began selling "Fire and Fury" at midnight Friday. It and another local bookstore reportedly sold out by 10 in the morning.

Wolff spent 18 months reporting on both the Trump campaign and the Trump White House. He reported from inside Trump Tower in New York City and later from inside the White House in Washington.

On Twitter Thursday, Trump said the book is "full of lies, misrepresentations and sources that don't exist." He also said he never spoke with Wolff for the book, and turned down his request for an interview many times.

However, Wolff said Friday on NBC's "Today" show that he had talked to the president for the book.

"I absolutely spoke to the president. Whether he realized it was an interview or not, I don't know, but it was certainly not off the record," he said. He said he spent about three total hours talking with the president.

Wolff says the book is mostly based on talks with people who have worked closely with Trump. He said he has records and notes from about 200 interviews with people connected to the Trump campaign or Trump White House. Wolff has confirmed he has audio recordings of some of those talks.

Wolff also said on the "Today" show that, "100 percent of the people around him [Trump]...they all say he is like a child."

Some parts of "Fire and Fury" were released earlier this week. They led to a vicious public fight between Trump and Bannon. In one passage, Bannon describes a meeting between a Russian lawyer and top Trump campaign aides -- including Trump's own son and son-in-law -- as "treasonous" and "unpatriotic."

After the passage was published, Trump said in a statement, "Steve Bannon has nothing to do with me or my presidency. When he was fired, he not only lost his job, he lost his mind."

Who is Michael Wolff?

Michael Wolff is a longtime writer and reporter based in New York City. He has been a media critic and columnist for USA Today, The Hollywood Reporter, New York Magazine and Vanity Fair.

In 2009, Wolff published "The Man Who Owns the News," a book about media business leader Rupert Murdoch. Just before its publication, Murdoch publicly questioned some of Wolff's reporting in that book.

Reuters reported this story. Ashley Thompson adapted it for Learning English, with additional materials from VOA News and the Associated Press. Caty Weaver was the editor.

chaotic - adj. in a state of complete confusion or disorder

aides - n. a person whose job is to assist someone

cease and desist - (legal term). an official order to stop doing something immediately

interview - n. a meeting at which people talk to each other in order to ask questions and get information

fire - v. to dismiss (someone) from a job