Update Required To play the media you will need to either update your browser to a recent version or update your Flash plugin.
By VOA
04 October, 2012

President Obama and Republican Party presidential candidate Mitt Romney debated each other for the first time Wednesday night. The debate was held at the University of Denver in Colorado.

Experts say the American economy is the top issue of the election campaign. And the debate centered on economic concerns. 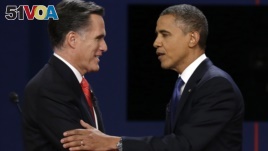 Republican presidential nominee Mitt Romney and President Barack Obama shake hands after the first presidential debate at the University of Denver, in Colorado, Oct. 3, 2012.p
Mr. Obama started by noting that, when he took office, the United States was having its most severe economic crisis since the nineteen thirties. He said that, in the past thirty months, five million jobs had been created in private industry. But he admitted a lot remains to be done.

One of the big questions of the campaign is how best to reduce the federal budget deficit. Mr. Romney has proposed lowering taxes as a way to lift economic growth. But the former Massachusetts governor sharply disagreed with Mr. Obama's descriptions of his tax cut plan.

"I'm not looking for a five-trillion-dollar tax cut. What I have said is I won't put in place a tax cut that adds to the deficit. That's part one. So there's no economist can say Mitt Romney's tax plan adds five trillion dollars if I say I will not add to the deficit with my tax plan."

Mr. Romney also said he would not reduce the share of taxes paid by high income individuals. Mr. Obama, however, said his opponent's plan for changing the tax system would not work.

"The fact is, if you are lowering the rates the way you described, Governor, then it is not possible to come up with enough deductions and loopholes that only affect high-income individuals to avoid either raising the deficit or burdening the middle class."

The candidates also debated the president's health care program, which some Americans call "Obamacare." Mr. Romney said it would hurt the economy and cost jobs.

The president said that when he took office, problems in the nation's health care system were just as urgent as the jobless rate. He said health costs drove government spending and troubled businesses and families.

"It was not just that small businesses were seeing costs skyrocket and they could not get affordable coverage even if they wanted to provide it to their employees. It was not just that this was the biggest driver of our federal deficit, our overall health care costs. But it was families who worried about going bankrupt if they got sick."

In closing, Mr. Obama said he wants to build on the strengths of his first four years in the White House. Mr. Romney said re-electing the president would hurt the middle class. He promised to replace the country's new health care program and to create millions of news jobs.

The two candidates are to meet again October sixteenth.