Update Required To play the media you will need to either update your browser to a recent version or update your Flash plugin.
By VOA
20 September, 2012

Vietnam is planning to open its markets to more foreign-owned securities companies. The plan is part of a larger effort to reduce government control of businesses and increase foreign investment. But a number of corruption cases are a concern for many Vietnamese. And rising prices could be a threat to economic growth.

The Vietnamese economy has slowed after about ten years of fast growth. And debt is a problem for the country's banks. Small businesses are struggling to get loans, and some people have lost jobs. 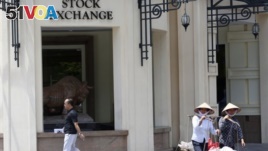 Vietnam's economy has slowed in recent months.
In July, the government announced plans to restructure some of the biggest state-owned groups. They include the country's biggest oil producer, PetroVietnam.

In September, officials announced a change in rules for foreign ownership of Vietnamese securities companies. Under the new rules, foreign banks, investment and insurance companies can buy up to one hundred percent of the shares in an existing securities company. Economists say the move provides support for privatization.

Vuong Quan Hoang is an economist with the University of Brussels. He says the move is an important step for Vietnam.

VUONG QUAN HOANG: "For foreign securities companies, I think this is going to be a good thing."

But Vuong Quan Hoang says the changes will likely not be felt for another twelve months, when the economy is stronger. He says there is a lot of work to be done now. And, he adds, there could be trouble in the Vietnamese real estate market.

There are already growing signs of public dissatisfaction with the economy. Recently, a group of students protested near the offices of PetroVietnam and the gas company Petrolimex. One student says rising fuel prices hit poor people hardest.

And there is growing anger over corruption.

This student says people are expected to pay bribes, providing money or gifts to officials to get the most basic services, like hospital care. Observers have welcomed the actions Vietnam has taken. But politics and the economy are linked in the country. And how well reforms will work remains unclear.